I probably owe the world an apology. So far, this blog has focused a whole lot on Thorin and his dwarves, and hasn't talked much about anything else (except Trolls, trailers and wizards who aren't falling in love), when in fact the hero of our story is most definitely not a dwarf (or a troll or wizard). Yes, it's about time we sit down and take a good look at the protagonist of this whole affair: a certain Mr. Bilbo Baggins of Bag End, Hobbiton. 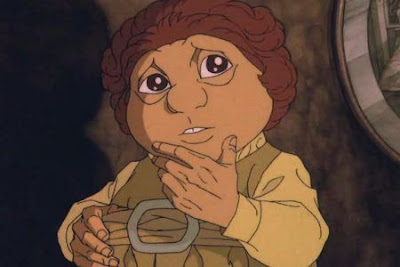 Now, call me crazy, but I really like the animated version of Bilbo. My first exposure to this version of our esteemed Hobbit was from books-on-tape that my grandma had. I practically wore the tapes out listening to the story of Bilbo the Burglar over and over, and I was fascinated by the drawings of hobbits and dwarves, wizards and trolls, and especially the Dragon. And you know what? I still like the animated version. Not sure why . . . call it nostalgia, I guess.

Anyways, there's a new Bilbo on the block, take a gander after the break:
Bilbo 2.0 (3.0, I guess, if you count the Bilbo from LOTR)

This is the earliest shot we've seen of Bilbo from the movie so far, and you can't really get much earlier than this. That look he's shooting at Gandalf (who's off the screen) is just perfect. I gotta admit, I think they've done a fantastic job of capturing Bilbo's personality here. However, if I have one complaint its that movie Bilbo doesn't look much like a fat hobbit. But . . . I guess you can't have everything, right?

Bilbo's the classic country gentleman, son of two wealthy hobbits, Bungo Baggins and Belladona Took, and a proper Baggins in every way (which means he'd never had any adventures . . . ever). Until, that is, a certain wizard showed up on his front porch and ruined everything. In fact, if you think about it, this story is all about how Bilbo failed miserably at being a Baggins:

This is a story of how a Baggins had an adventure, found himself doing and saying things altogether unexpected.

Things don't really start to get uncomfortable for Mr. Baggins until a troop of dwarves shows up at Bag End to recruit him for an adventure. It's there in his own comfortable hole that Bilbo gets his first taste of what adventures are like . . . and realizes for the first time that part of him (the Tookish side, no doubt) actually wants to go off on some crazy journey:


Then something Tookish woke up inside him, and he wished to go and see the great mountains, and hear the pine-trees and the waterfalls, and explore the caves, and wear a sword instead of a walking-stick.

Of course, adventures are never as simple as what Bilbo imagines. . . as the contract Thorin presents him with implies:


For your hospitality our sincerest thanks, and for your offer of professional assistance our grateful acceptance. Terms: cash on delivery, up to and not exceeding one fourteenth of total profits (if any); all traveling expenses to be guaranteed in any event; funeral expenses to be defrayed by us or our representatives, if occasion arises and the matter is not otherwise arranged for.

Bilbo and the Contract 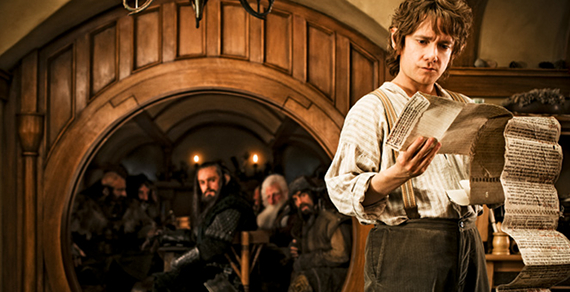 I love the image below because it captures Bilbo doing what he does a lot of during the whole adventure: wishing he were somewhere else.

It was after tea-time; it was pouring with rain, and had been all day; his hood was dripping into his eyes, his cloak was full of water; the pony was tired and stumbled on stones; the others were too grumpy to talk. "And I'm sure the rain has got into the dry clothes and into the food-bags, " thought Bilbo. "Bother burgling and everything to do with it! I wish I was at home in my nice hole by the fire, with the kettle just beginning to sing!" It was not the last time that he wished that.

Bilbo wishing he were Anywhere Else 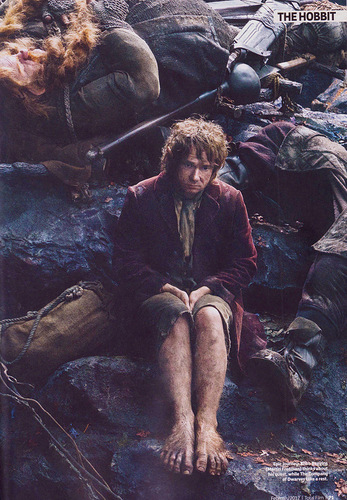 Now, don't get the wrong opinion . . . the journey isn't all bad for Bilbo. For example, Rivendell and Master Elrond seem to capture the hobbit's imagination. Its there, after all, that Bilbo retires too after he passes the Ring to Frodo and retires from the Shire.

Bilbo and the Gang in Rivendell 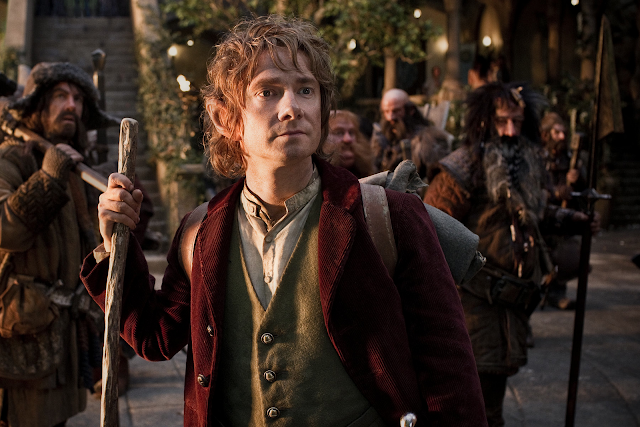 Above is a shot of Bilbo walking into Rivendell (at least, from his expression I assume its one of his first glimpses of the Last Homely House).

Tired as he was, Bilbo would have liked to stay a while. Elvish singing is not a thing to miss, in June under the star, not if you care such things.

Along the course of his journey, Bilbo the Bunglar is transformed into Bilbo the Burglar and he finds that he's become the unofficial leader of the dwarves and their go-to guy. Now, this post has gone on more than long enough, so I'll just end with a few highlights of our Burglar's adventures (not in any particular order): 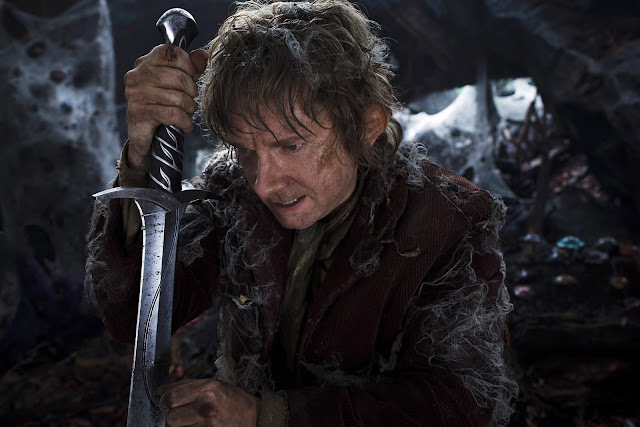 Somehow the killing of the giant spider, all alone by himself in the dark without the help of the wizard or the dwarves or of anyone else, made a great difference to Mr. Baggins. He felt a different person, and much fiercer and bolder in spite of an empty stomach, as he wiped his sword on the grass and put it back into his sheath.

And then there's the all important meeting between Bilbo and a certain someone, far down in the deep placed of the earth:

All at once there came a bloodcurdling shriek, filled with hatred and despair. Gollum was defeated . . . The cry brought Bilbo's heart to his mouth, but still he held on. Now faint as an echo, but menacing, the came behind:

Then there was silence.

And last but definitely not least, Bilbo burgles something he didn't intend to:

Bilbo and the Ring

All in all, Bilbo Baggins becomes something much more than a simple thief and hobbit; but we'll explore that some other time.