Fleshing Out the Company: Dwalin and Balin

Over the next couple of posts I'll be looking at the members of Thorin's Company (excluding our estimable hobbit, for the time being), evaluating the movie's take on the dwarves and looking at how these dwarves compare to Tolkien's descriptions in the Hobbit. Oh, and just so you know, I'll be introducing the dwarves in the order they appear in the book, not in the order their movie photos were released.

Since I'll be quoting the book from time to time, I'll just mention that the copy I'm using is The Hobbit (Green Leatherette Collector's Edition) from Houghton Mifflin Harcourt (1973). For consistency's sake I'll stick to this edition, so take that into consideration when I mention page numbers.

All right, on to the good stuff– 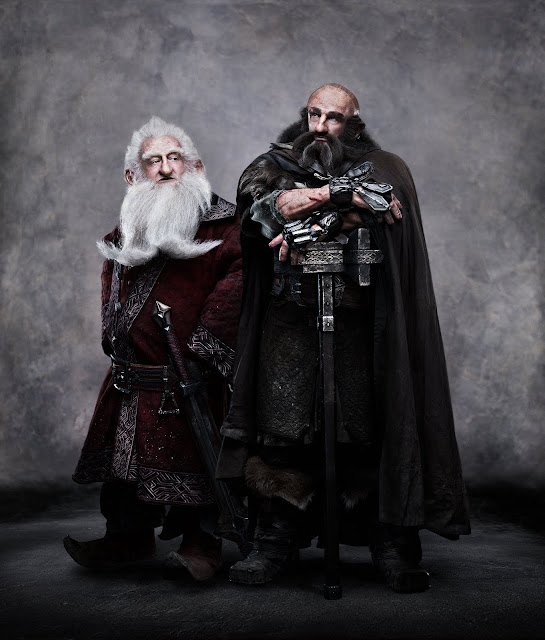 Our first two dwarves are Dwalin (above right) and Balin (above left). Over all, these guys look sweet. I mean, Balin has a branching beard. A branching beard! And look at that hammer Dwalin is using as an arm wrest. These guys mean business.

Here is the description of these two dwarves, provided with the photo:

Dwarf Lords in their own right, Balin and Dwalin are close relatives of Thorin. Beyond this, these brothers are two of his most loyal and trusted friends.

An old warrior, Balin has lived through hard times and fought many battles, yet he harbors doubts about the wisdom of the Quest to retake the Lonely Mountain.

Dwalin has no such forebodings – his belief in Thorin’s leadership is unshakeable. A powerful and bruising fighter, with a natural tendency to distrust anyone who is not a Dwarf, particularly anyone who might be an Elf, Dwalin is not someone to cross lightly.

In the book, Dwalin is the first dwarf to arrive at Bag End, disturbing Bilbo's lazy spring morning, and Tolkien paints a very different picture of the dwarf than we see in the image above:


It was a dwarf with a blue beard tucked into a golden belt, and very bright eyes under his dark-green hood.

Looking at the movie Dwalin, we notice a few things right off: he definitely does not have a blue beard. But what does "blue beard" really mean, anyways? Either Tolkien meant the little guy literally had a blue (think blue like the color of your tongue after guzzling a blue slurpee) beard, or did he mean a gray beard with a slight blue-ish cast in certain light. Either way, movie Dwalin–with his brownish beard– definitely does not fit the bill. And his beard is not tucked into his belt. Not by a long shot. He could barely tuck that thing into his collar. In fact, all of the movie dwarves have a depressing lack of beard long-ness, if you ask me. But, to be fair, I suppose its gotta be pretty hard to act with a mile of beard hanging off your face, so maybe the scale-back in length was a necessity. As for the bright eyes thing . . . I can't really tell (and I'm not really sure how you measure that anyways). Last but definitely not least, Dwalin is missing his green hood, though his cloak might be green . . . I can't tell. The missing hood thing may not be a big deal to you, but as I'll explain shortly, its kind of a big deal for me, in a nostalgic sort of way.

So in short, the movie version of Dwalin doesn't really seem to be based on the book Dwalin, but is that necessarily such a big deal? If you're a Tolkien purist, then yes, it is. But the movie version has some redeeming qualities in his own right. For instance, Dwalin's bald scalp is covered in runic tattoos (you can't see them too well in the image above, but if you open the image in a new tab and magnify it, you'll see 'em), and that's pretty cool. The huge war hammer is sweet, as are his metal gauntlet/hand bling thingies, though to be honest, I'm really sure how utile they'd be. And, come to think of it, how does he keep the big metal flaps from flopping around? Maybe thats not something a dwarf worries about.

For comparison, here's a shot of Dwalin from the Rankin and Bass animated classic (which still gives my wife nightmares to this very day): 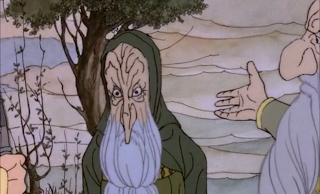 As you can see, this version of Dwalin (weirdly shaped head notwithstanding) sticks a little closer to the description in the book, with the long blue-ish beard and green hood. But, this guy looks ancient. Plus, his nose looks like something TSA would flag at an airport security check. So, even though this version is closer to the book, still not my favorite.

All in all, even though movie Dwalin isn't exactly right out of the book, I still like him. I'd give the movie Dwalin a 7 out of 10, in fact.


As I mentioned in the last post, Balin is my favorite of the dwarves so far. For starters, he's got those cool pointed boots, and did I mention the branching beard? Another reason this guy caught my eye is that out of all the movie dwarves, Balin comes closest to matching Tolkien's original description:

Instead there was a very old looking dwarf on the step with a white beard and a scarlet hood.

Very old looking? Check. White beard? Check. Scarlet hood . . . well, sort of. Balin's clothes are definitely scarlet, but there is a distinct lack of hood-age. In fact, my biggest problem with all these dwarves is that Ori is the only one sporting the all-important hood. Now, you could argue I'm quibbling here, and maybe I am, but Tolkien makes a pretty big deal out of the hoods in the book, and I always liked that intro scene where the dwarves appear by ones, twos and threes, bow to Bilbo and then hang their hoods up in Bag End's entry hall. Of course, maybe what we see here aren't Balin's traveling clothes, so there's still a chance we'll see some good hood action in the future. Keep your fingers crossed.

Now, there is a problem with Balin being my favorite: of all the dwarves in Thorin's company, Balin forms the closest friendship with Bilbo, so I assume we'll get to know him quite well in the movie; but, we also know how and where Balin meets his "doom", and it isn't a happy ending. It's Balin who gathers together a company of his kin in Erebor and launches the ill-fated recolonization of Moria sometime between the end of The Hobbit and the beginning of FOTR:


'It looks like a tomb,' muttered Frodo, and bent forwards with a curious sense of foreboding, to look more closely at it. Gandalf came quickly to his side. On the slab runes were deeply graven . . .

'These are Daeron's Runes, such as were used of old in Moria,' said Gandalf. 'Here is written in the tongues of Men and Dwarves.

'He is dead then,' said Frodo. 'I feared it was so.' Gimli cast his hood over his face.

All this means is that going into the movie, I'll already know what happens to one of my favorite characters. Kind of a killjoy. On another note, not to be too much of a stickler, but did you notice that Gimli's hood was mentioned? Sheesh. Details, people, details. So, poor Balin's ultimate fate isn't a good one, but for the time being, he'll be a fun dwarf to watch.

And as a last note on Balin, here is a quick look at Balin from the cartoon: 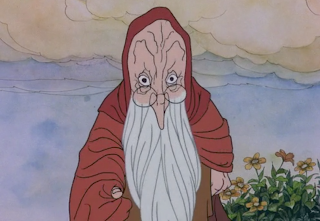 Very old looking? Check. White beard? Check. Scarlet hood? Check. Glasses? Wait, glasses? What the heck? The only dwarf they could scrounge up was a near-sighted one? Yeah, I've always wondered about those spectacles. Although, if anyone in Middle Earth was going to invent corrective lens-wear, I suppose the dwarves would make the most sense. So, did the the Rankin and Bass team do a better job of staying faithful to Tolkien's Balin? Er, I guess so, technically (though I've always wondered why he and Dwalin have such strangely shaped skulls). But, all in all, I like the new movie Balin much better. I give him a 9 out of 10.

So, what do you all think of these two dwarven brothers? Opine below!