There and Back Again; Or, How do you get 2 movies from 1 book?

So just how, you might ask, is Peter Jackson possibly going to make two movies out of one book? You might also ask why he'd want to do that, but I don't really have an answer for that . . . although I expect New Line and Warner Bros. making more money has something to do with it. But the first question is most definitely answerable, and I, good reader, am about to reveal all. Or most of all, at least.


It won't come as a surprise to anyone familiar with The Hobbit (the book, I mean) that during Bilbo's grand adventure, Gandalf keeps disappearing . . . usually right when he'd be the most help. As mysterious as that may seem, the book does give us some hints about where the wizard was sneaking off to and what he was doing. What's more, the Appendices at the end of the ROTK fill in a lot of details about the double-life Gandalf was leading during the events of the Hobbit.


Various leaks and hints from cast and crew have revealed that The Hobbit will be expanded into two stories by including and elaborating on the busy-work that kept dragging Gandalf away from Thorin & Co. in the book. And this is where things get interesting. More after the break!
The first clue we get as to what Gandalf will be doing when he leaves Bilbo and the dwarves is found right at the start of the book, during the Unexpected Party, when Gandalf is explaining how and where he recovered Thror's ring:

Your father went away to try his luck with the map after your grandfather was killed; and lots of adventures of a most unpleasant sort he had, but he never got near the Mountain. How he got there I don’t know, but I found him a prisoner in the dungeons of the Necromancer.”

“Whatever were you doing there?” asked Thorin with a shudder, and all the dwarves shivered.

“Never you mind. I was finding things out, as usual; and a nasty dangerous business it was. Even I, Gandalf, only just escaped. I tried to save your father, but it was too late. He was witless and wandering, and had forgotten almost everything except the map and the key.”

“We have long ago paid the goblins of Moria,” said Thorin; “we must give a thought to the Necromancer.”

“Don’t be absurd! He is an enemy quite beyond the powers of all the dwarves put together, if they could all be collected again from the four corners of the world.”

Here is the first mention we get of the Necromancer, who lived in the southern end of Mirkwood and was generally bad news for anyone concerned.

We don't really learn anything else about Gandalf's secret travels, or the Necromancer, until all the action is over and Gandalf and Bilbo are back in Elrond's house. Then, almost as an after-thought, Tolkien lets this little nugget slip:

Gandalf it was who spoke, for Bilbo was fallen quiet and drowsy. Most of the tale he knew, for he had been in it, and had himself told much of it to the wizard on their homeward way. . . but every now and again he would open on eye, and listen, when a part of the story which he did not yet know came in. It was in this way that he learned where Gandalf had been to; for he overheard the words of the wizard to Elrond. It appeared that Gandalf had been to a great council of the white wizards, masters of lore and good magic; and that they had at last driven the Necromancer from his dark hold in the south of Mirkwood.


So apparently, in his freetime, Gandalf slipped off and quietly did away with this Necromancer fellow while Bilbo and the dwarves were traipsing through Mirkwood. And that, my friends, is the basis for all the "new" stuff that will be added in create two movies from one book.


But who the heck is this Necromancer guy? And what is this "great council of the white wizards" and how did they managed to drive the Necromancer out of Mirkwood, if it's true that he's more powerful than "the powers of all the dwarves put together"? To answer these questions, we have to look beyond The Hobbit.


In FOTR, we learn bit-by-bit who and what the Necromancer was . . . word comes to the hobbits mostly from traveling dwarves:


It seemed that the evil power in Mirkwood had been driven out by the White Council only to reappear in greater strength in the old strongholds of Mordor.

Two things are interesting about that passage: first, the attack by Gandalf and the Council that is mentioned in The Hobbit, didn't actually weaken the Necromancer (the "evil power") . . . he was stronger when he reappeared in Mordor; and second, the "great council of the white wizards" we heard about in The Hobbit has been changed to the shorter "White Council".

Later on in FOTR, we learn even more from Gandalf, who recounts his dealings with the Necromancer to all those gathered together at the Council of Elrond:

“Some here will remember tha many years ago I myself dared to pass the doors of the Necromancer in Dol Guldur, and secretly explored his ways, and found thus that our fears were true: he was none other than Sauron, our Enemy of old, at length taking shape and power again. Some, too, will remember also that Saruman dissuaded us from open deeds against him, and for long we watched him only. Yet at last, as his shadow grew, Saruman yielded, and the Council put forth its strength and drove the evil out of Mirkwood and that was in the very year of the finding of this Ring: a strange chance, if chance it was.”

––The Fellowship of the Ring, part II; Ch. 2: The Council of Elrond

Yep, you read that right (and . . . you probably knew already anyways). The Necromancer is none other than Sauron. Remember him? 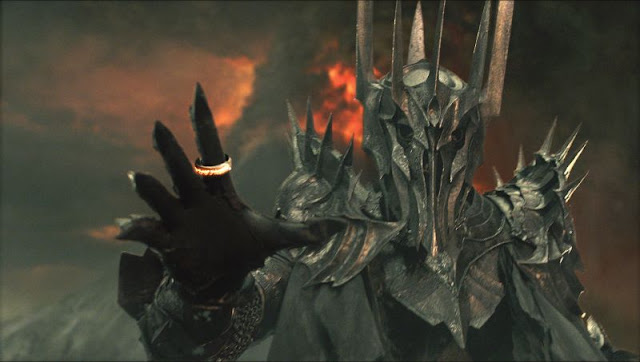 So, we can expect the extra material in the two Hobbit movies to fill us in on the White Council's attack on Dol Guldur, the stronghold of Sauron in Mirkwood.

And just who belongs to the White Council? Gandalf, certainly, along with Elrond, Galadriel (hence her little spot in the trailer), Círdan the Shipwright, and Saruman the White (I've wondered if there is a connection between the original title of the Council "the great council of the white wizards", and Saruman's later title of "the White" . . . interesting). There are a couple of other people who might have participated in the Council (Thranduil, Glorfindel, Rhadagast) but there is no way of really knowing if they were considered part of the group or not. For an excellent discussion on the Council, check out this article from the Encyclopedia of Arda.

In short, Gandalf's meetings with the White Council, and their battle against the Necromancer, provide the starting point for the extra material we'll be seeing in the Hobbit movies. Obviously, not a lot is known about what the effort to drive Sauron from Mirkwood was like . . . we'll have to wait until December to see how Peter Jackson & Co. envision it.