The Hobbit Reread 4: An Unexpected Party 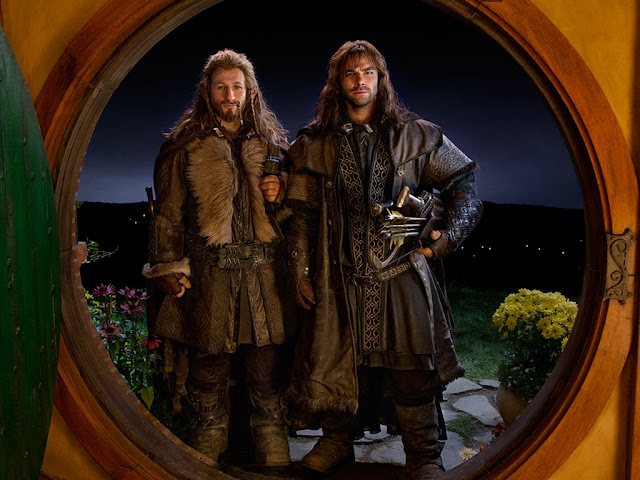 Ok, so I know I'm gonna have to start doubling up on these because I've been lazy and not posted every week. But . . . I'm gonna get it all done before Dec. 14 rolls around. You have my word. Today we'll start the fourth post of this reread and the first post dealing with a chapter from the actual book. Chapter 1, that is, An Unexpected Party.

Bilbo Baggins is a respectable––and rich––Hobbit bachelor who lives in Bag End above the Water. For a hobbit, being well-thought-of means basically one thing: a complete lack of adventures of any sort––and Mr. Baggins has so far managed to avoid adventure above all else. Of course, all of that changes one morning in spring when Bilbo steps out onto his porch for a smoke and who of all people should show up but Gandalf the Grey. Gandalf invites the surprised hobbit to join him for an adventure, and Bilbo promptly turns the wizard down, though he tries to make up for it by inviting Gandalf to tea on the following day . . . and then promptly retreats back into his hobbit hole.

By the next day, Bilbo had forgotten completely about his appointment with Gandalf, and is only reminded of it by a loud banging on his door. It is not, however, the wizard. It is two dwarves. And after that, two more. In all, thirteen dwarves show up unannounced and unexpected at Bag End: Balin and Dwalin, Fili and Kili, Dori, Nori, Or, Oin and Gloin, Bifur, Bofur, Bombur and last––but not least––Thorin Oakenshield, the leader of the company. Gandalf arrives with the last of the dwarves and Bilbo finds himself playing host to a rather loud and hungry party.

After a bit of music, Thorin announces that it is time discuss their reason for gathering: the dwarves are on a quest for riches and vengeance . . . a quest that requires an "audacious" burglar for any chance of success. And Mr. Baggins is that burglar. To no one's surprise (not even Bilbo) the hobbit faints dead away at the news and his fellow conspirators are unable to revive him. At this point the dwarves' opinion of their hobbit companion can't get much lower. Gloin sums it up nicely:


Will he do, do you think? It is all very well for Gandalf to talk about this hobbit being fierce, but one shriek like that in a moment of excitement would be enough to wake the dragon and all his relatives, and kill the lot of us. I think it sounded more like fright than excitement! In fact, if it had not been for the sign on the door, I should have been sure we had come to the wrong house. As soon as I clapped eyes on the little fellow bobbing and puffing on the mat, I had my doubts. He looks more like a grocer than a burglar.

Luckily (for the readers at least) Bilbo overhears this last bit, and though his Baggins side warns against it, his Took side wins and he barges back into the meeting . . . and the rest, as they say, is history.

Thorin describes the history of his people, and their great kindom of Erebor in the Lonely Mountain. The dwarves are of Durin's folk and Thorin is their ruler, heir to the royal line. They are all, however, outcasts . . . Erebor has lain in ruin for centuries, home to the great dragon Smaug who destroyed their home long ago. Thorin's plan is to sneak back into the Lonely Mountain and get revenge on Smaug––or at least steal back some of the dwarves' treasure, which the dragon is now using as a (very uncomfortable-sounding) bed.

The whole venture is sounding pretty hopeless to Mr. Baggins until Gandalf produces a secret map and key that had been made by Thorin's father, and turns them over to the lead dwarf. The map reveals a secret door into the mountain––one that Smaug is unlikely to know of due to its small size––and the key will open that door. Bilbo shows his first signs of excitement, perking up when the map is produced. Thorin is more hopeful about the whole affair once the map has been explained to him . . . up until that point the dwarf leader hadn't had a clear idea of how to actually get into the mountain.

Before the planning can go any further, Bilbo demands to know what's in it for him, so Thorin grudgingly recounts the history of the mountain, the wealth of the dwarves and the fair city of Dale . . . culminating with the arrival of Smaug and the following holocaust. Thorin only managed to survive because he and a few others were outside the mountain when the Dragon struck.

Bilbo suggests that the best coarse of action is to actually locate the secret East Door and then go from there. As he sensibly reasons, there really is not reason to plan too far beyond that, since none of them even know if they'll be able to find the door. The suggestion is a good one, but is more an attempt on Bilbo's part to end the conversation and bid the dwarves fair-well. Thorin, however, sees through our hero's trickery and admits that the plan is a good one, but that it will be the company's burglar who does the sitting and thinking on the doorstep.

Much (I suspect) to Bilbo's relief the dwarves finally agree that it is high time for bed. They leave their breakfast orders with the hobbit and head to bed. Bilbo––feeling less and less Tookish by the minute––goes to bed as well; but he cannot escape the sound of Thorin humming dark music, and his dreams are troubled.

One of the things I noticed right off when rereading the opening of this chapter is how nicely Bilbo's recollections of Gandalf tie in with the description Gandalf gives to Frodo in The Quest of Erebor of how he met Bilbo several decades before the events of The Hobbit. In The Quest, Gandalf recalled:


Somehow I had been attracted by Bilbo long before, as a child, and a young hobbit: he had not quite come of age when I had last seen him. He had stayed in my mind ever since, with his eagerness and his bright eyes, and his love of tales, and his questions about the wide world outside the Shire.

––Unfinished Tales: The Quest of Erebor

In chapter one, Bilbo can't hide a bit of his younger self when he realizes the man he is talking to is Gandalf. Excitedly, he exclaims:


Gandalf, Gandalf! Good gracious me! Not the wandering wizard that gave Old Took a pair of magic diamond studs that fastened themselves and never came undone till ordered? Not the fellow who used to tell such wonderful tales at parties, about dragons and goblins and giants and the rescue of princesses and the unexpected luck of widows' sons?

Clearly Bilbo loved the tales Gandalf used to tell, and though he tries to pretend otherwise, he can't quite hide the fact that he still finds those "wonderful tales" quite exciting––


Not the Gandalf who was responsible for so many quiet lads and lasses going off into the Blue for mad adventures? Anything from climbing trees to visiting elves––or sailing in ships, sailing to other shores! Bless me, life used to be quite inter–– I mean, you used to upset things badly in these parts once upon a time.

Bilbo still harbors a fondness for "adventures", though he tries to suppress it. And in some way he has suppressed it . . . in The Quest, Gandalf admits to Frodo that when he finally met up with Bilbo again that spring morning––after already arranging for the Dwarves to arrive later at Bag End––he was quite dissappointed by what he found:

. . . Bilbo had changed, of course. At least, he was getting rather greedy and fat, and his old desires had dwindled down to a sort of private dream.

––Unfinished Tales: The Quest of Erebor

Tolkien did a fine job of taking what he'd written in The Hobbit and using The Quest of Erebor to mesh the original Bilbo with the Bilbo of LOTR . . . in fact, I can't help but wonder if these lines from The Hobbit are some of the "edits" that Tolkien made to the book once LOTR had come out. They just seem to line up a bit too well with later accounts, if you know what I mean.

Moving on. I can't help but have sympathy with Thorin and the dwarves when they express their doubts about Bilbo, despite Gandalf's (sometimes feisty) assurances that this hobbit is the (er . . .) man for the job. I mean, our hero doesn't do much in this first chapter except moan and protest and faint dead-away. He's clearly out of his comfort zone, and poor Thorin has a lot riding on this quest: riches, honor and vengeance to name but a few things. Can you really blame the dwarf for being a bit skeptical?

We get to see a bit more of Bilbo's 'Tookish' side when Gandalf brings out the map . . . apparently our hobbit hero has always loved maps, and this one serves to finally pique his interest and draw him into the planning of the quest. What I can't help but wonder is Gandalf had been counting on the map catching Bilbo's eye from the beginning? In The Quest, the wizard claims he'd completely forgotten about the map until that night in Bag End. But had he really? It seems to me that Gandalf might have realized that an intriguing, secret map might be just the carrot he needed to induce Burglar Baggins to come out of his hobbit hole. Thoughts?

It has always been interesting to me that Thorin knew nothing of the map, key and secret door. I think the fact that Thrain only gave up the map and key when he was three-quarters dead and crazed is quite revealing . . . the secretive nature of the dwarves must go beyond anything seen in men. The fact that Thrain would take the map and key with him on a quest that he had to know was at the least dangerous, at the worst suicidal, without leaving a copy of each behind with Thorin or at least telling his son about the secret door is surprising. The only explanation I can think of is that the dwarf Ring had already gotten too great a hold on Thrain's mind. I wonder if this moment will be played up in the movie? In the book Thorin only acts a little surprised that he'd never even heard of the map and key, but I can see this being a more defining moment in the movie, perhaps hinting at a troubled relationship between Thrain and Thorin?

Bilbo is interesting through the entire chapter because his "Tookish side" is clearly ready for the adventure, but his "Baggins side" is constantly fighting back, insisting that adventures are no business for a quiet, respectable Hobbit. This back and forth play between his bold and timid halves sets up Bilbo's struggles for most of the story: can he be the hero that is needed time and again throughout the quest, or will he choose the easy and safe route that everyone (including himself but excepting Gandalf) clearly expects him to.

Well, for today we'll leave you with a sleeping hobbit. Next time we'll start on the real adventure.
Posted by Landon at 10/29/2012