How Big are Rhosgobel Rabbits? 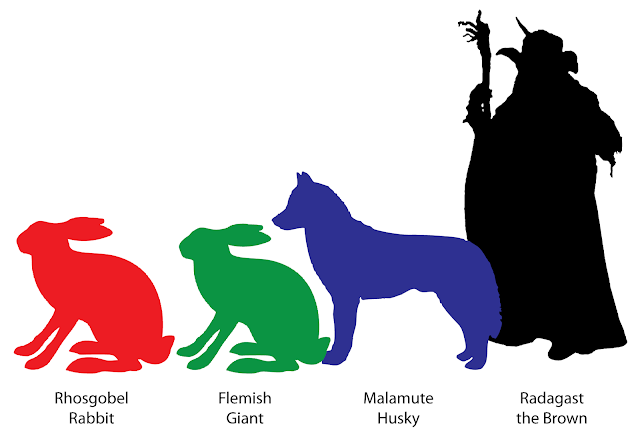 So I noticed that a lot of people were stumbling across my blog while trying to figure out just how big Radagast's rabbits are. Well, I did some quick research (and a little bit of eye-balling the various scenes where the wizard and his fuzzy haulers share the screen) and came up with this little graphic you see above. Jump past the break to see more!

Malamute huskies are (apparently) the largest species of husky, and a go-to sled dog. The size of a male Malamute compared to Radagast is shown in blue above. Right next to the husky is a Flemish Giant, one of the largest breeds of rabbit. Yeah, that's right. There are rabbits big enough to give a toddler a piggy-back ride. Don't believe me? Here's a pic:

Anyways, the final rabbit on the left is my scientifically determined guess of how big the Rhosgobel rabbits are. Why is it bigger than the Flemish Giant? Because it felt right. And because bigger is cooler.