An update from Mr. Jackson himself! Here is the first official video blog for the Desolation of Smaug (the eleventh vlog in total, if you keep track of that kind of thin). What things was I excited to see? Jump past the break to find out!

In no particular order, here are the little tid-bits I found really interesting: 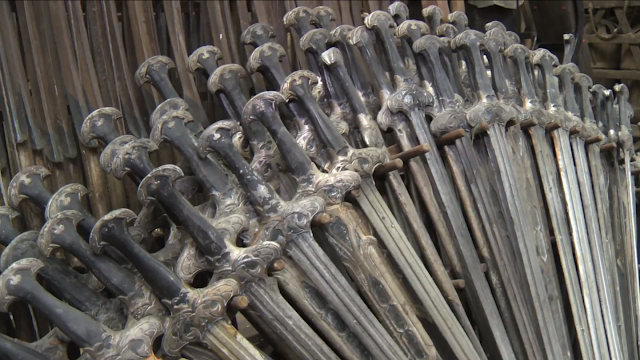 These swords from the Dale armory are awesome. I particularly like that they are a little reminiscent of the Rohan swords from LOTR . . . which makes sense, since the two peoples sprang from a common ancestor. 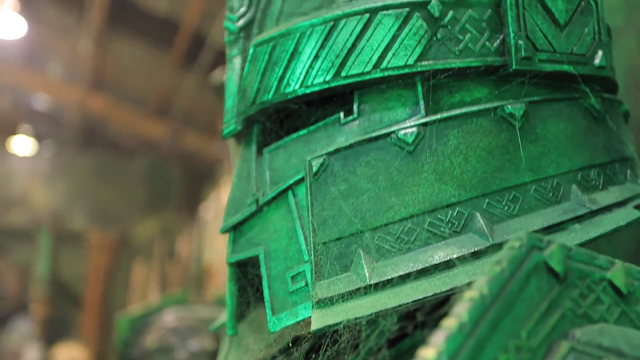 I presume this is a shot of dwarvish armor inside the Lonely Mountain. I'm really looking forward to seeing the armor that Thorin and the dwarves put on and wear into battle at the end of the Hobbit. Will it look something like this, or be even more ornate? 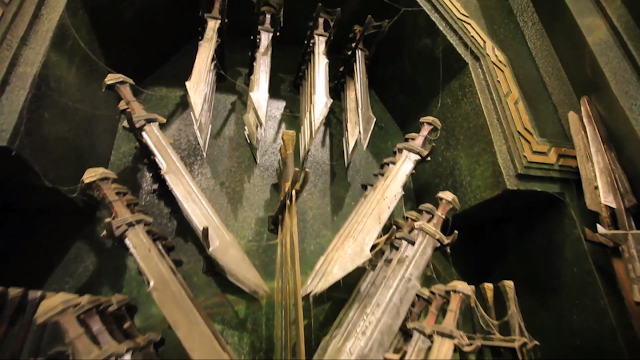 These knives are sick. Hopefully we'll see some of the dwarves claiming these. Same goes for the spears below . . . they're not axes, but they still have the blocky, angular look that sort of screams "dwarf". 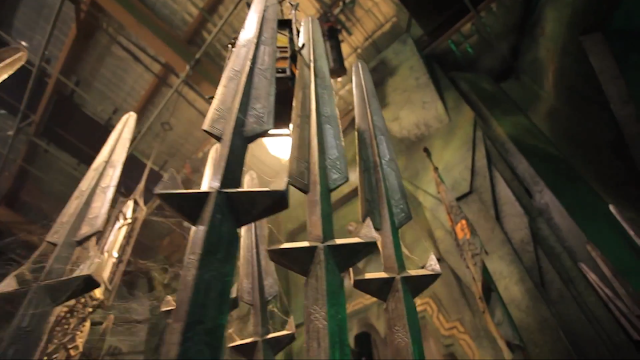 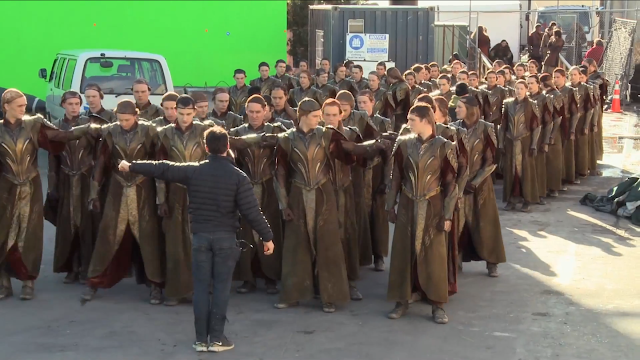 Lots of elves! Two things in the images above and below jumped out at me. First, while the armor that these elves are wearing has a similar aesthetic to the elvish armor we've seen before, it doesn't seem quite so . . . refined, if you will, as if the smiths that created it weren't quite as skilled as the High Elves that forged Elrond's armor. What's more, the Wood Elves' armor seems to have a lot more serrations (not the pauldrons on their shoulders) . . . giving the armor a slightly more savage feel. Same goes for the swords, which are more hooked and barbed than other elvish weapons. I'm diggin' it. 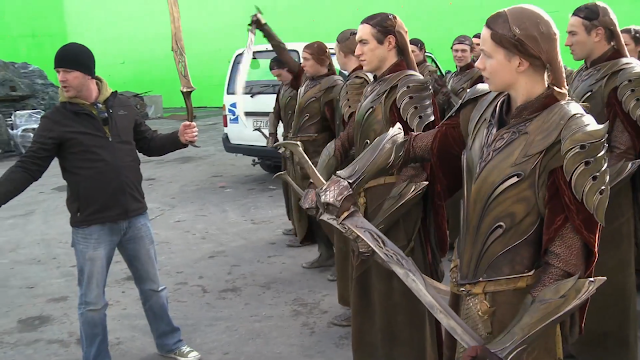 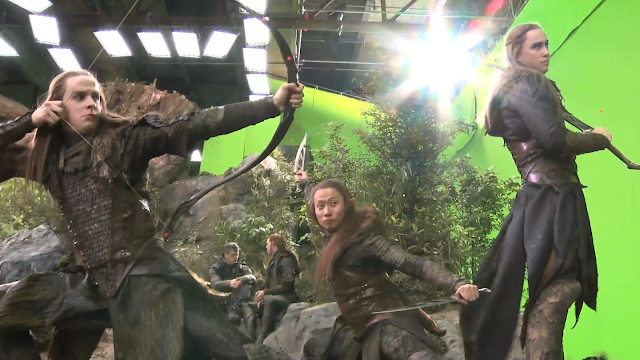 This picture is kind of a continuation of my last thought. These would elves are wearing armor that doesn't seem quite as fine as that worn by Elrond in TH:AUJ, or by any of the Elves in LOTR. And that makes sense, since the Wood Elves are a bit less refined than their High Elf cousins. 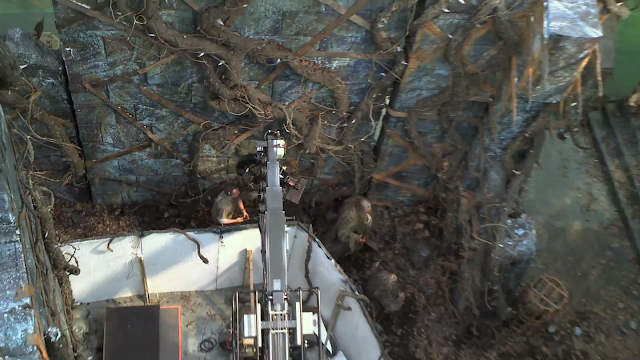 So, apparently this is a shot of Gandalf and Thrain sneaking through the labyrinth of Dol Guldur. I'm looking forward to seeing how Thrain fits into the story line of the Desolation of Smaug. In the book, Gandalf meets Thrain in Dol Guldur many years before Thorin's quest. So is this a flashback, or has Mr. Jackson shuffled up the timeline? 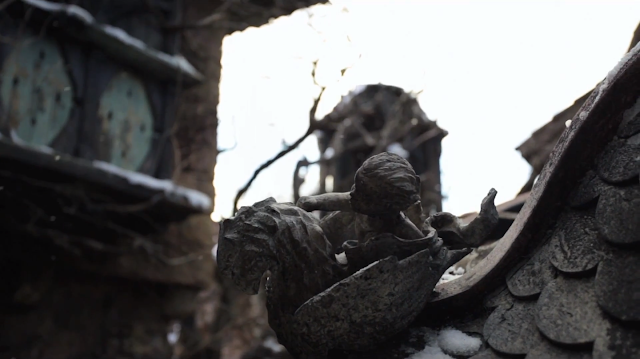 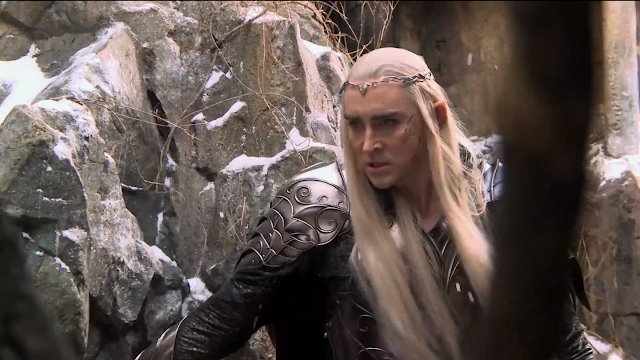 Ok . . . I can admit it. Thranduil manages to look pretty sick in his armor. What is he doing in Dale? Is this our first glimpse of scenes that will be in the last of the three Hobbit films? 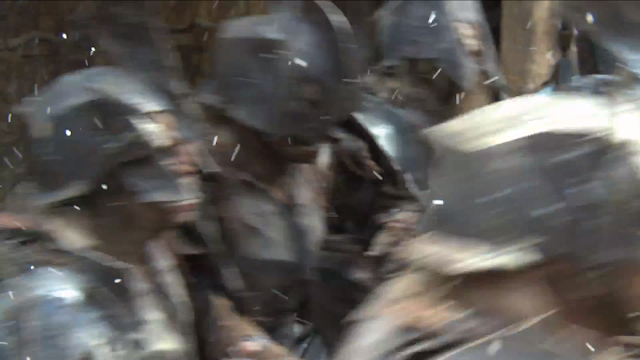 Blurry image, I know. But these orcs with their heavy helmets look distinctly different from anything we've seen so far in the Hobbit movies. Are they orcs from Dol guldur, perhaps?