Review: The Desolation of Smaug 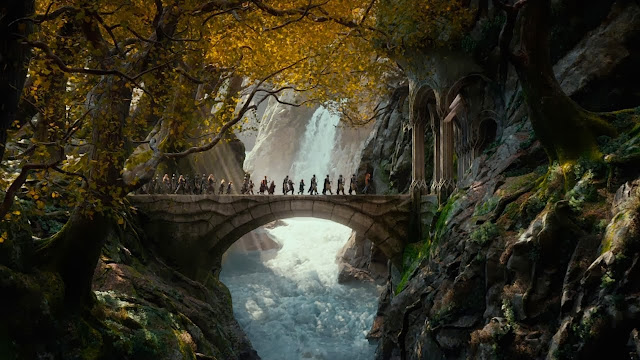 You know, I expected this post to be a long spew of me shouting/raving about how insanely cool the Desolation of Smaug was––instead . . . I've got decidedly mixed feelings about the latest installment of the Hobbit trilogy. It's not that I didn't like the movie. Far from it. Like all of Peter Jackson's Middle-earth movies so far, Desolation definitely ranks as one of my favorite movies of all time. What I can't decide, is how it stacks up against it's predecessor, An Unexpected Journey, and how well it did at retelling Tolkien's story. Jump past the break, and I'll do my best to explain.

Oh, and I'm too tired to even care about watching what I'm saying, so BEWARE SPOILERS!

More than any of the previous LOTR or Hobbit movies, Desolation deviates from the book. A few things are left out that I wish had been included: shooting at the stag in Mirkwood forest and Bombur falling in the enchanted stream; but where Desolation really plunges away from the book's stomping grounds are the numerous additions that Mr. Jackson and Co. have worked into the film. Plenty of sources online had warned that the movie featured a lot of changes, so I tried to go in mentally prepared for them. And––to my pleasant surprise––I actually really liked nearly all of the additions and story changes. Yeah, that's right. Only one or two of them even came close bugging me, and the changes I had been worried about (Tauriel, Legolas, etc.), actually turned out really well IMO.

So, instead of recounting the whole movie to you, I think I'll just make a list of the things I liked about the movie, then a list of things I didn't like so much. Here goes:

Things I liked about The Desolation of Smaug:

Things I disliked about The Desolation of Smaug:
Conclusion

To finish this (long) review up, just let me reiterate that––despite the ten points I detailed above that I really didn't like about the movie––I really enjoyed it overall. It was a lot of fun, and I think the good things about the film definitely outweigh the bad. Plus, there's always the Extended Edition to iron out some of the wrinkles I mentioned (hopefully). And to be honest, if the past four LOTR/Hobbit movies are any indication, I'll probably end up liking The Desolation of Smaug a little bit more each time I see it. To that end, I'm going to go see the movie again in a few days, and I'll let you all know afterwards if a second viewing seriously changes any of my opinions.