Fleshing Out the Company: Dori, Nori, Ori, Oin and Gloin

[His] bell rang again, as if some naughty little hobbit-boy was trying to pull the handle off. 'Someone at the door!' he said, blinking. 'Some four, I should say by the sound,' said
Fili. 'Be-sides, we saw them coming along behind us in the distance.'

. . . Then the bell rang again louder than ever, and he had to run to the door. It was not four after all, it was FIVE.

You read right, Kind Reader! After the souped-up Fili and Kili trot into Bilbo's hobbit hole, not one, not two, but five dwarves show up all at once. And who might these five be, you ask? Well, assuming you've already forgot the title of this post, I'll give you a hint as to who one of them is: 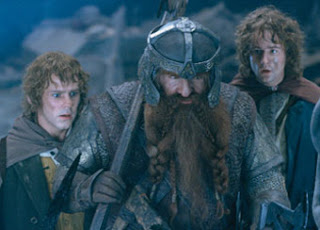 Enough of a hint for you? Who might the other four uninvited dwarves be? Find out, after the break. 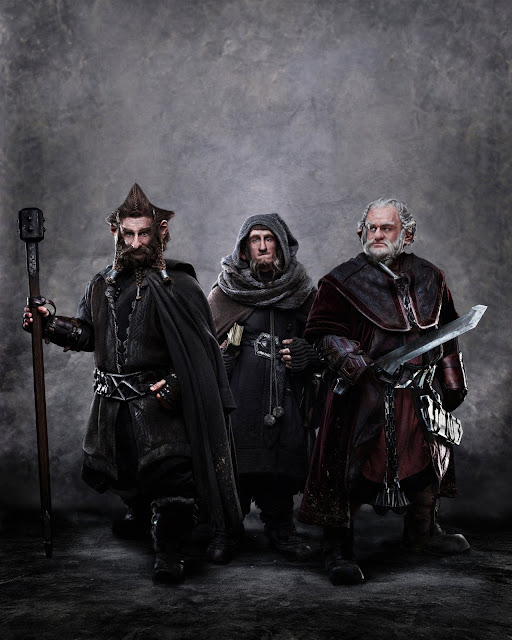 Here's the accompanying text to go with the official photo:

These three brothers, all sons of the same mother, could not be more different from each other.

Dori, the oldest, spends much of his time watching out for Ori, the youngest; making sure he’s not caught a chill or got himself killed by Wargs or Goblins.

Nobody quite knows what Nori gets up to most of the time, except that it’s guaranteed to be dodgy and quite probably, illegal.

Dori, Nori and Ori are intensely loyal to each other – and whilst they are perfectly happy fighting amongst themselves, woe-betide anyone who means harm to one of these brothers.

These were the first three of the movie dwarves to be revealed, and I think they all look pretty darn good.


Dori is the guy in reddish leather on the right, holding that awesome sword. I mean, look at that thing. It's like an ax and a short sword got into a bar fight and this is what came out of it. On the downside, Dori's beard is smallish. I'd have liked to something more . . . well, something he could actually tuck into his belt. And again, there's the lack of a hood. Why on earth are we ignoring the one bit of detail Tolkien gave about the dwarves' clothing? They all had hoods! Anyways, other than that, Dori is a pretty happening dwarf, if you ask me. 7 out of 10.


Nori is the left-most of the brothers. Yep, the guy with the star shaped hair. When I first saw that, I'll admit it was a bit jarring; but, its grown on me over the past few months. As has his staff/cudgel thing. Pretty cool. And, he has a hood on his cloak. Its thrown back, but definitely there. Thank you, Mr. Jackson. The description that came with the photo says that Nori is usually doing something dodgy or illegal. My only question is, illegal according to whom, exactly? Its not like there's a lot of governments rubbing shoulders up their in Eriador. Let's count: Arnor fell apart thousands of years ago, the Elf-Kindom in Lindon vanished when Sauron was overthrown by Isildur, Rivendell is just one tiny village (where dwarves are not all that welcom) and Laketown is on the other side of the Lonely Mountains. So, either Nori is ripping off Hobbits in the Shire and Bree, or he's picking the pockets of his fellow dwarves. I guess there could always be little villages of Men scattered across the land, but if there are, they're too small to merit even a dot on the map. I guess we'll find out in the movie who Nori is preying on. In short, Nori gets a 7 out of 10 too.


Last of the brothers is Ori. And what have we here? If you'll direct your attention to the photo above, you'll notice that Ori is not only wearing a hood, but he even has it pulled up! In fact, the only thing that can detract from Ori's hood-wearing coolness is his skimpy beard. After Balin, Ori has got to be my next favorite dwarf. I mean, look at him! He's got a sweet hood, he's wrapped in his cloak with its killer fuzzy tassles, and he's got a book, which I believe is a subtle clue to both Ori's role in Thorin's company (perhaps as historian or recorder) and to events later in Ori's life. It was in fact Ori, who recorded the terrible end of Balin's short-lived recolonization of Moria. The dwarf was particularly suited to the task, as Gimli recalled during the Fellowship's time in Balin's tomb:


'That would be Ori's hand,' said Gimli, looking over the wizard's arm. 'He could write well and speedily, and often used the Elvish characters.'


But wait, patient reader! There are two more visitors in today's post!


The Dynamic Duo: Oin and Gloin 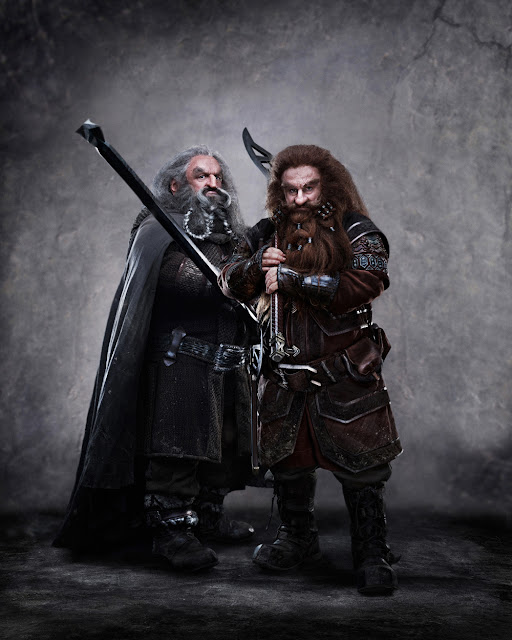 Now here are some dwarfy looking dwarves! I mean, look at these guys! They're the prototypical stocky, massively bearded, axe-wielding, armor wearing troglodytes we know and love. These guys look awesome. Here is the description that came with the photo:


Distant cousins of Thorin Oakenshield, these two doughty Northern Dwarves join the Company out of a sense of loyalty to their kin, and also because they have a substantial sum of money invested in the venture. Along with Bombur, Gloin is the only other married Dwarf in the Company (there being a shortage of female dwarves in general). His wife is an acclaimed beauty with a particularly fine beard. Gloin is the proud father of a young son, Gimli, who will go on to become part of the famous Fellowship of the Ring.

The word "cousin" used in the previous paragraph is a bit of a stretch. Thorin is more like the brothers' third cousin (though I'm not really sure how that second-cousin-twice removed thing really works). To put it literally, Oin and Gloin's great-grandfather was brother to Thorin's great-grandfather (see The Return of the King; Appendix A: Durin's Folk).

Oin (the hatchet-nosed guy on the left) kind of epitomizes the proud dwarf, in my opinion, with his skeptical stare and defiant posture. This guy has a lot going for him: from the sweet beard, cloak and hood (the hood isn't pulled up), to that huge, metal . . . crowbar he's holding. He definitely looks like a proud, wealthy dwarf who isn't afraid to get his hands dirty.


Like Ori and Balin, Oin was also part of the effort to recolonize Moria. We don't know much about his fate. The only hints we get are from the hastily scribbled recordings in the book of Mazurbal:


'Well, I can read no more for a long way,' said Gandalf, 'except the word gold, and Durin's Axe and something helm. Then Balin is now lord of Moria. That seems to end a chapter. After some stars another hand begins, and I can see we found truesilver, and later the word wellforged, and then something, I have it! mithril; and the last two lines Oin to seek for the upper armouries of Third Deep , something go westwards, a blur, to Hollin gate.'

–The Fellowship of the Ring; Part 2, Ch. 5: The Bridge of Khazad-dûm

So, it looks like Oin must have perished along with the rest of Balin's company, though technically it is never stated. All in all, a very interesting character, and since I really can't find anything regarding Oin worth complaining about, so I'll give him a 9 out of 10.


Oin's brother Gloin is probably the best known of the dwarves in The Hobbit, aside from Thorin himself, because he is the father of Gimli Elf-Friend, the trusty dwarf of LOTR. The movie Gloin's relationship to Gimli is really played up, from red-brown beard to his dark leather outfit. He looks pretty sweet, especially with that wicked axe he's got (has anyone checked to see if its the same axe Gimli uses in LOTR, or just a very similar one?) and his belt buckle of doom. Gloin doesn't have a hood . . . but, he's just so cool looking that in this one case I'll let it slide.


We meet Gloin in his later years in Rivendell, where he is seated next to Frodo at a great feast:

Next to Frodo on his right sat a dwarf of important appearance, richly dressed. His beard, very long and forked, was white, nearly as white as the snow-white cloth of his garments. He wore a silver belt, and round his neck hung a chain of silver and diamonds. Frodo stopped eating to look at him.

'Welcome and well met!' said the dwarf, turning towards him. Then he actually rose from his seat and bowed. 'Glóin at your service,' he said, and bowed still lower.

–The Fellowship of the Ring; Part 2, Ch. 1: Many Meetings

In the book, Gloin is particularly dubious of Mr. Baggin's abilities as a thief, and voices his doubts during the late night meeting in Bag End. I'll be interested to see if this is played out in the movie. Gloin is such a cool looking dwarf, he's getting a 9.5 out of 10. 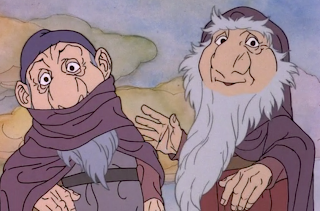 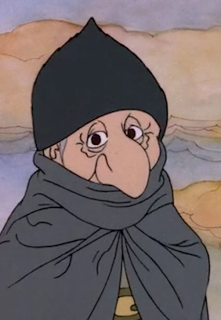 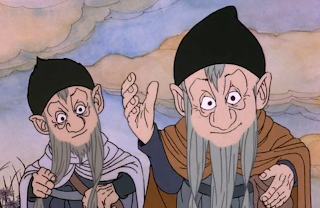 Dori, Nori, Ori, Oin, and Gloin were their names; and very soon two purple hoods, a grey hood, a brown hood, and a white hood were hanging on the pegs, and off they marched with their broad hands stuck in their gold and silver belts to join the others.


As you can see, the cartoon got the hood colors right (though Oin and Gloin's hoods are pulled down), but even though I'm fond of these guys, this time I have to say that the movie dwarves (even with the short beards and severe lack of hoods) are a lot better.