The Strange History of Thror's Key

"Also," went on Gandalf, "I forgot to mention that with the map went a key, a small and curious key. Here it is!" he said, and handed to Thorin a key with a long barrel and intricate wards, made of silver. "Keep it safe!"

It's easy to forget that in the beginning, the quest to the Lonely Mountain depended entirely on a single key and a secret door that the Dragon didn't know about. In fact, without the key, Bilbo wouldn't have been able to get into the mountain, Smaug never would have been ticked off enough by the little hobbit to fly out and attack Lake Town, and Bard the Bowman wouldn't have had the chance to shoot him (did I mention that there would be spoilers?).

So what is this all important key, and where did it come from? That, good reader, is what we'll be talking about today.

The quote above describes the moment when Gandalf first produces the key and gives it to Thorin (who, as usual, is the picture of gratitude). Along with the key came a map, a copy of which is posted right after the break: 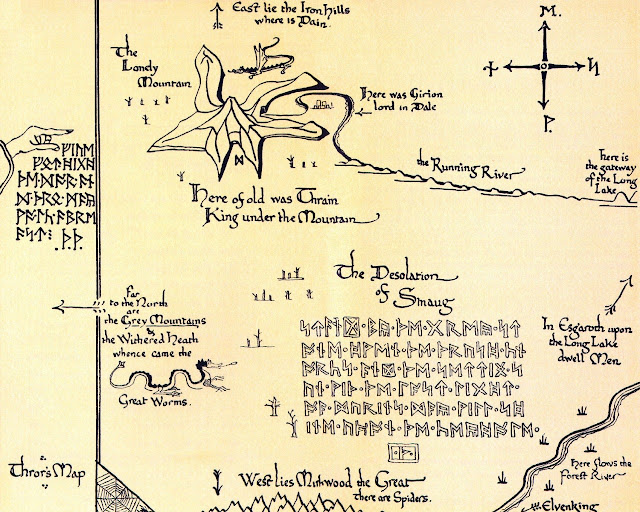 Now, there's two important things to notice about this map: first off, its labeled in the lower lefthand corner as "Thror's Map", and as you might guess, it just so happens that not only does the map belong to Thror, but the Key as well; second, further up the lefthand side you'll see a hand. That weirdly shaped hand is important, as Gandalf explains to Thorin, Bilbo and the dwarves:

"You see the rune on the West Side, and the hand pointing to it from the other runes? That marks a hidden passage to the Lower Halls."


But who was Thror? And why did he make a secret passage? And how, just like Thorin demands to know, did the key end up in Gandalf's hands?

Thror was Thorin's grandfather and the chief of the dwarves who led them back to the Lonely Mountain after it had been abandoned for several generations. He became King Under the Mountain and he and his people became filthy rich (just the way dwarves like it) crafting and selling armor and weapons and gold and jewels to men and elves. As we all know, Old Smaug heard of all that treasure and just couldn't resist making it his own. The Lonely Mountain was attacked, Dale (a town of Men just beneath the Mountain) was burned, and most of the dwarves in Erebor were killed. Thorin just happened to be outside the mountain when the Worm attacked, so he made it, and later he was joined by his father and grandfather, Thrain and Thror.

The surviving dwarves wandered across Middle-earth for many years, and eventually all the poverty and begging got to Thror, who decided he'd had enough. He gave his possessions, including the key to the secret door, to his son Thrain, and then set off with his servant Nar to find what he could find:


He was a little crazed perhaps with age and misfortune and long brooding on the splendour of Moria in his forefathers' days; or the Ring it may be, was turning to evil now that its master was awake, driving him to folly and destruction. From Dunland, where he was then dwelling, he went north with Nár, and they crossed the Redhorn Pass and came down into Azanulbizar.

When Thrór came to Moria the Gate was open. Nár begged him to beware, but he took no heed of him, and walked proudly in as an heir that returns. But he did not come back.

Did I forget to mention that Thror possessed one of the seven Rings of Power given to the Dwarf-Lords? Must have slipped my mind. Thror was murdered by orcs, and his death sparked a long war between the Dwarves and Orcs. When it was over, Thrain and Thorin were still poor and still alone. Thrain had the key and the Ring, but eventually he, like his father, tired of wandering and working for Men. Tolkien speculates that it was probably the Ring that caused so many of the misfortunes experienced by Thorin's ancestors. Whatever the case, Thrain decided to go searching for riches too, only this time, instead of passing his possessions on to Thorin, he took the Ring and the Key with him. 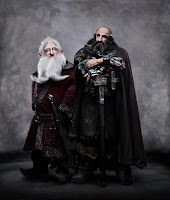 Traveling with none other than Balin and Dwalin, Thrain set out to the East, hoping to find and reclaim the kingdom and riches of the Lonely Mountain. As per usual, things didn't go as planned. Apparently, Sauron (who was holed up in Dol Guldur) had been waiting for just such an opportunity to strike at the Heir of Durin and the possessor of one of the Rings of Power. Thrain and his companions were hounded by orcs and wargs as they crossed Eriador and the Misty Mountains. They managed to cross the Anduin and reach the eaves of Mirkwood; however, when Balin and Dwalin awoke from their first night camping under the shadows of the Forest, Thrain was gone. His companions searched and waited for him, hoping that somehow he might return. But he never did. Thrain––and the Ring of Power-–were never seen by mortal eyes again. The Key, however, has a different story.

Balin and Dwalin eventually gave up and returned to Thorin, who had set up shop (and was slowly growing rich) in the Blue Mountains, west of the Shire. Thorin had no knowledge of the Key or the secret door into the mountain, but he was full of a burning desire for revenge against the Dragon who had brought such ruin on his family.

Meanwhile, one very important person––Gandalf the Gray, was busy . . . as he usually seemed to be. The power of the Necromancer (Sauron in disguise) was growing and Gandalf and others (Elrond, Galadriel, etc.) were getting nervous about the evil spreading from Dol Guldur. So Gandalf went to explore the evil place. We've seen hints of this journey in the movie trailer:

It was there, while Gandalf scouted out the Necromancer's stronghold, that he found the long lost Thrain . . . or what was left of the once proud dwarf, at least. Gandalf described how the Key fell into his hands after Thorin demanded (rather angrily) to know why the Key hadn't been left to him:

"I did not 'get hold of it,' I was given it," said the wizard. "Your grandfather Thror was killed, you remember, in the mines of Moria by Azog the Goblin."

"And Thrain your father went away on the twenty-first of April, a hundred years ago last Thursday, and has never been seen by you since––"

"Well, your father gave me this to give to you; and if I have chosen my own time and way for handing it over, you can hardly blame me, considering the trouble I had to find you. Your father could not remember his own name when he gave me the paper, and he never told me yours; so on the whole I think I ought to be praised and thanked!"

. . . "How he got there I don't know, but I found him a prisoner in the dungeons of the Necromancer."

. . . "I tried to save your father, but it was too late. He was witless and wandering, and had forgotten almost everything except the map and the key."

Here is a shot from the movie of Gandalf's encounter with the "witless and wandering" Thrain:

And that about sums up this rather winding and twisting journey. The rest is history: Thorin received the key from Gandalf, Elrond discovered the moon letters on the map that told how to use the key and secret door, and it was Mr. Bilbo Baggins who took that first brave step through the secret door into the Dragon's lair.

But it was all possible because of a strange little key.

Up next: Friday's at the Mathom-House featuring artist Otis Frampton