To Talk or Not to Talk: Should Trolls Even Ask that Question?

Almost since it was announced that there would be a Hobbit movie, there's been a lot of speculation about whether or not the Trolls, Eagles and animals would talk like they do in the book, or whether they'd be like the Trolls and Eagles in the LOTR movies . . . non-speaking, in other words. People seem to be pretty divided in their opinions, with Tolkien purists asking "How on earth could they not speak if they do in the books?" and the movie-lovers complaining that making the Trolls and what not talk would make the new movies too different from the original trilogy . . . too juvenile, I guess.

So, the big question is, are the Trolls gonna be more like this: 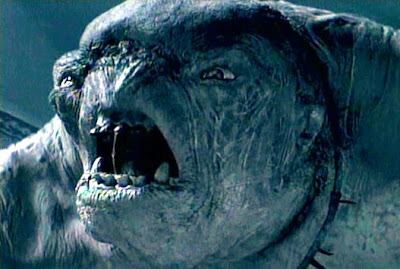 Read on after the break, where there'll be more cool pics and some compelling evidence:

It seems like most people out there are firmly in favor of the Trolls not talking. For example, here's an article from theonering.net and here's another, where predictions are made that the Trolls won't speak. In some ways, I can't really blame people for wanting The Hobbit to be like the original movies. Who wouldn't? They were awesome. And the Trolls in the movies were pretty sweet looking. The battle in Balin's Tomb is still my favorite action moment from the entire trilogy, and its the Cave Troll (above) that really makes that battle the intense moment that it is. Then there's the sweet looking Trolls in the Return of the King, like these two guys below: 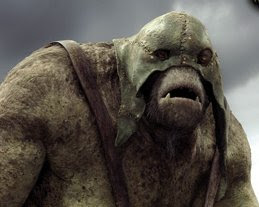 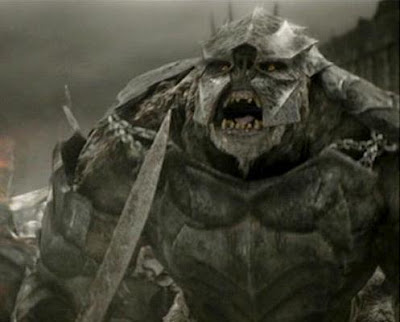 But even though I think the Trolls in the LOTR movies are awesome, I am most definitely think that The Hobbit movie should stick to Tolkien's own ideas in the book, and make the monsters and animals talk that do talk. And I think there's evidence that the Trolls, at least, are going to talk. Below is an image captured from the trailer that was released in December. Its the part where we see the dwarves charging towards the Troll's campfires. There's a lot of roaring and we see the Trolls' big stumpy legs, but for half a second we also see a Troll's face (sorry for the grainy image, this was as big as I could make it):

Now, I think if you'll scroll back up and compare this troll to the other trolls from the LOTR movies, you'll notice some big differences. First, this guy has an actual nose. The other trolls (especially the Cave Troll) kind of just have depressions were their noses should have been. Second, this guy's eyes are much more expressive and human-like, whereas the other trolls' eyes are beady little things. Third, Bert here has big, human-looking ears, compared to the tiny stumpy things you can just make out on the Cave Troll. Fourth and lastly, Bert's mouth is tiny compared to the LOTR trolls, and his teeth look a lot more human. In short, this Troll from the Hobbit has a much more expressive, human-looking face. And why would Mr. Jackson's people go to all the trouble of making expressive, human-looking Trolls, unless they were going to speak?

So, my vote is, the Trolls at least, are definitely going to speak. But what do you guys think? Speaking Trolls our no? Let the world know in the comments below!

Incoming: The Strange History of Thror's Key
Posted by Landon at 1/16/2012