Wanted: Information on a mysterious dwarf

Well folks, make no mistake. There is a mystery afoot. We were all treated to the 6th Hobbit production video a few weeks ago, and towards the end of the ~12 minute video, we catch a glimpse of an unknown dwarf. Before reading any further, take a look for yourself, then jump past the break for a discussion of just who this guy might be.

The dwarf in question can be spotted right around 12:16. Just in case you missed him, here are two still-frames from the video that show the mysterious dwarf a bit more clearly: 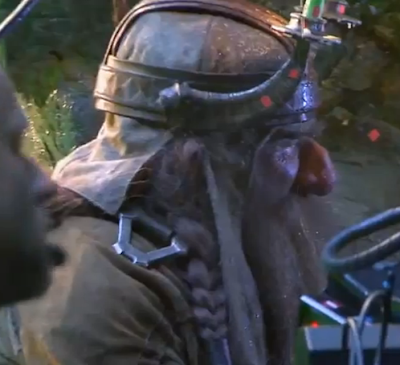 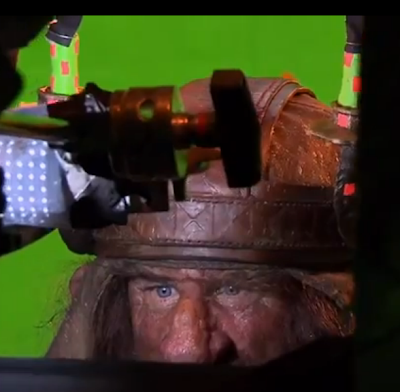 As you can see, not only is this dwarf not one of the thirteen members of Thorin's company, he's somebody we've heard nothing about so far! Now, there are a whole lot of possibilities about who this guy could be, so I've been brainstorming for a while trying to figure out which possibility is most likely.

But before we list the possibilities out, let's see what information we can glean from these photos:


Okay, with that brief analysis out of the way, let's list up some possible identities for our dwarf John Doe:
Which of these four do I think is most likely? Well . . .

Random Unknown Dwarf. This is certainly a possibility, but it's also no fun, so we'll ignore it.

Nár. This is my personal favorite. Nár was the loyal dwarf (not to mention the only dwarf) that accompanied Thorin's grandfather Thror on an ill-fated attempt to reclaim the fabled mansions of Moria. So, why do I think the this dwarf could be Nár? First, the dwarf in the video looks old . . . and if I'm remembering correctly, Tolkien describes both Nár and Thror as being rather advanced in years by the time they set out for Moria. Second, the quick shot we get of the dwarf during the production video seems to suggest the dwarf is peering at something, while at the same time trying to remain hidden. This fits well with the story of Nár and Thror: when they finally arrived at the gates of Moria, Thror entered the dark halls alone . . . Nár, however, was too fearful to follow his lord into the shadows. Instead, he lurked at the entrance of the mines, and was watching when Thror's headless body was thrown back out. Filled with rage at the orcs who'd murdered Thorin's grandfather, Nár went looking for revenge, which eventually led to the War of Dwarves and Orcs.

Now, I'll admit there are some issues with my Nár theory . . . for example, if this dwarf is Nár and the production video is giving us a glimpse of the part where he's hiding outside Moria waiting for Thror, why does he have candles on his helmet? He's outside . . . he doesn't really need the light, and I doubt he was planning on getting much mining done. Another problem is the dwarf's wardrobe. Thror was King Under the Mountain, and even in exile you'd imagine that he probably kept as many fine things about him as possible (dwarves being dwarves), and you'd expect that his closest friends and associates––including Nár––were probably rich and noble dwarves. In contrast, the dwarf from the video is certainly not dressed in such a fashion. On the other hand, Tolkien does seem to suggest that Thorin's family went through some tough times after being driven from the Lonely Mountain, so it's possible Nár really was reduced to poverty.

If the dwarf in the production video really is Nár, that suggests we'll be seeing at least a little bit of the history of Thorin's family . . . and possibly even some events from the War of Dwarves and Orcs, which I think would be fantastic.

Dain Ironfoot.  The third possibility is that the dwarf is none other than Dain Ironfoot. During the climactic battle of Azanulbizar, which was the last battle of the War of Dwarves and Orcs and was fought just outside the gates of Moria, Dain Ironfoot won renown when he killed the orc chieftain Azog in single combat (right after Azog had killed Nár). After he defeated Azog, Dain stepped into Moria, and when he came out he claimed to have seen Durin's Bane (the Balrog) lurking within the shadows. It's possible that in the video production we're seeing the moment when Dain has just stepped into Khazad-dûm and he sees the Balrog.

This is a fun possibility, but I don't think it very likely. First off, Dain was considered very young by dwarf standards at the battle of Azanulbizar, which is why he gained so much respect for killing Azog. Second, Dain was also of the royal line of Durin, and the dwarf in the video just doesn't look rich enough to be the second-in-line heir to Durin's crown. Finally, the candles on the helmet just don't strike me as combat ready. The dwarf in the video doesn't really look like he's in the middle of a huge battle. So, in my opinion, our mystery dwarf probably isn't Dain.

Thrór.  Last but not least, the dwarf might be Thrór; but, to be honest, I doubt it. The clips from the production video might be giving us a glimpse of when Thrór first stepped into Moria . . . but this theory has the same problems that my Nár theory has, and some more besides. The dwarf is old, which fits with Tolkien's description of Thrór, but there is really no other indication that this dwarf is the lost Heir of Durin. And the candles . . . I just don't see the former King Under the Mountain wearing something like that. Do you? In short, I think this is the least likely of the four possibilities.

That, good reader, sums up my list of potential identities for the mystery dwarf. Of course, there are probably plenty of other possibilities. This could be a random dwarf (or not so random) watching the destruction of the Lonely Mountain when Smaug first attacks it. Or something completely differet . . . but I think the options I listed out above make the most sense.

What do you think? Do you agree with my guesses, or not? Who is this nameless dwarf? Post your theories in the comments section below.