In Defense of Radagast the Brown

What's up with all the hating on Radagast? I mean, I guess I can understand how he might not be some people's cup-o'-tea . . . but sheesh! Some people actually compared the poor dumpy wizard to Jar Jar Binks. That's right. Jar-freaking-Jar Binks. I don't get it. I went into the movie a little apprehensive about this new wizard on the block, but I was completely blown away. Jump past the break to read why:


1. Radagast is a fresh take on "The Wizard" The literary world is full of wise old mentors like Gandalf who are alternately wise, grumpy, or slightly funny when the situation warrants it. I mean, come on . . . the wise old mentor is almost (if not literally) an archetype. Think about all of them traipsing through story after story: Gandalf, Obi-wan Kenobi, Dumbledore, Merlin, Belgarath, Allanon, Thom Merrilin . . . I'm sure there are more––those are just the ones I can think of off the top of my head. You get my point. There are a lot of them. Radagast, in contrast, is something new. The guy is the hermit of all hermits. Is he weird? Yes! Is he goofy? Yes! Is he slightly off-putting? Yes! But what else would you expect from a guy who has been living with animals for most of his mortal life? Is he what the general populace of Tolkien fans was expecting? No. But I think that is because we have been conditioned to expect wizards characters to fit a certain mold. The great thing about movie Radagast is that he breaks that mold without going against anything that Tolkien ever wrote about him.

I mean, if you think about it, everything we know about Radagast from LOTR and the Hobbit can be summed up quickly:
Does Tolkien every say Radagast would fit into genteel society? Nope. Does he ever suggest that Radagast doesn't feel more comfortable around animals than people? Nope. Does he every say Radagast isn't twitchy and possible a little crazy? No. You get my point. Movie Radagast conforms to everything we know about the wizard from the author's writings, and then adds a bit more in . . . and in retrospect, none of us should be surprised that Mr. Jackson fleshed out a character whose role in the story he was expanding beyond its original scope. To sum it up, the only thing that Radagast doesn't conform to is our own expectations. And that isn't necessarily a bad thing.

2. Sylvester McCoy was fun to watch on the big screen 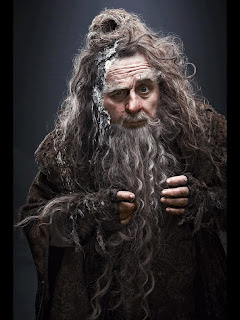 Admit it. Regardless of your opinions of the role Mr. Jackson assigned him, McCoy was fun to watch. The guy's twitchy, eye-brow wriggling interpretation of Radagast was not only funny, it was endearing. Here is a wizard––a being normally in command of any situation and the focus of attention––for whom dealing with real people is awkward at best . . . and you can read it on his face at every moment. Does he look goofy at times? Yeah. And I'll admit, the first time I watched him go more cross-eyed than any normal human being should be able to, I was a little skeptical . . . but then it started to make sense to me. In my opinion, at least in the movies, there was always a big difference between Sauruman's magic, and Gandalf's magic. Sauruman is big and brash and pompous, commanding swarms of crows, standing at the tops of towers with his arms raised, using his voice like thunder to bring down a mountain. Gandalf, on the other hand, has a more subtle approach . . . whispering to moths, appearing when least expected, and doing things that blur the line between magic and just plain good luck (think "Dawn take you all!" . . . did Gandalf really make the sun come up, or was that just his flair for the dramatic combined with good timing?). Taken in this context, Radagast's magic is just another manifestation of power . . . a more wild, earthy and living magic that physically affects the wizard (twitchy face, cross eyes).

In fact, one of my favorite "Radagast Moments" is when the wizard is barricaded in his little house, spiders swarming outside. He's rushing back and forth, panting and clearly at a loss for how to save his hedgehog friend. "I don't understand why it's not working!" he exclaims. "It's not as if it's witchcraft." Then––suddenly––his frenetic motion dies down, and he gets a far away look. His voice drops to a deep whisper. "Witchcraft . . . Oh, but it is. A dark and powerful magic." For that one moment, the brown hedge-wizard that had become enamored with the creeping things of Middle-earth slipped away and he became a true Istari . . . Radagast from Valinor, a powerful being who could recognize the source of the evil that is poisoning Mirkwood.

In fact . . . I just found this moment in a clip on YouTube! Enjoy:

Now, after viewing that clip can you deny that Radagast is a hoot to watch, even if you don't like Mr. Jackson's take on the wizard? I think not!

Anyways, I'm pretty sure there was one other reason I was going to put down about why I liked Radagast . . . but this post has been written over the course of several weeks (darn you busy life!), and now I can't remember what I originally intended to write. So . . . shoot me your comments. Judging by the number of hits my first post on Radagast has had, I'm sure there are a lot of you out there with different opinions.