Strangers in a Strange Land: Thranduil and Legolas 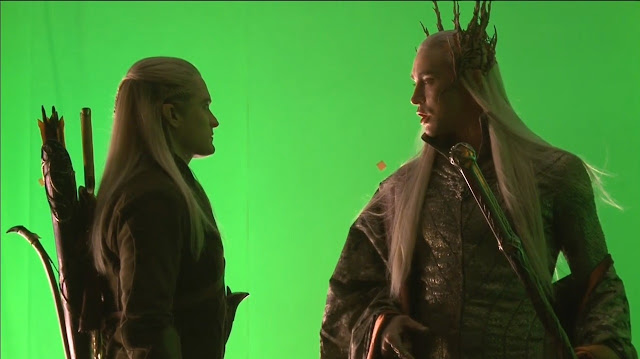 So, before I start this post, two funny things: first off, if you're hoping to find a good picture of this father-son elf duo, just be aware that googling "Legolas and Thranduil"will lead to a pile of garbage you'll have to dig through to get anything remotely resembling a descent photo; second, I decided to do a post about Thranduil and Legolas last night, and then to my surprise I found that Stephen Colbert had scooped me! Jump past the brea and take a look at this funny April Fool's video from Mr. Jackson (Colbert jumps on at 1:27):


Now, the question that Colbert poses to PJ concerns something that not many people are aware of: Thranduil and his son Legolas are actually from a completely different race of elves than the rest of their subjects (or at least, most of them). Surprising, eh? Legolas and Thranduil belong to a group of elves known as the Sindar. To help you understand the difference between the different elvish groups, here is a quick image I made showing the various groups of Elves, and the origins of some of the key characters in the Hobbit and LOTR (Elrond, Aragorn, Legolas, etc.). Click on the image to see it at full resolution: 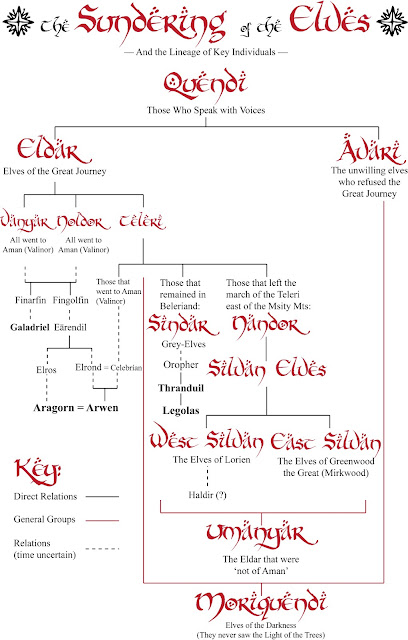 As you can see, Thranduil and Legolas are only distantly related to the rest of the Mirkwood elves. The question is then, how did foreigners end up in control of the Woodland Realm? To answer that question, we'll have to take a journey back in time.

Middle-earth was created and ruled by the Valar, a host of god-like beings (think the Greek Pantheon, or maybe the Norse gods) that were in a constant battle with one of their brothers––Morgoth––who had rebelled in the beginning. The main goal of the Valar was to prepare Arda (the world) for the coming of the elves. Morgoth, on the other hand, hoped to rule the elves and subjugate them to his will. After many long centuries, during which Middle-earth was destroyed and remade many times by the warring Valar, the elves were born on the shores of Cuiviénen. At that time there was still no sun or moon, and the elves quickly became enamored with the stars. They named themselves the Quendi, which means Those Who Speak with Voices, because they believed themselves to be alone in the world. Of course, they weren't. Morgoth was watching them from the shadows, and eventually the Valar learned of the elves too through Oromë, the hunter.

Oromë discovered the elves while chasing prey through the dark forests of Middle-earth, and––after returning to Valinor with three elven 'ambassadors'––he went back to the elves and invited them to leave the shadows of Middle-earth and return with him to Valinor. Here's where the divisions of the elves begins. The extended families of the three elven ambassadors all decided to take Oromë up on his offer and go to Valinor, these three groups became the Vanyar, the Noldor and the Teleri. Together they are collectively known as the Eldar, or "The Elves of the Great Journey". Those elves that refused to leave Cuiviénen were henceforth known as the Avari . . . the elves who refused the great journey.

Now, the Eldar didn't all leave at once. The Vanyar and the Noldor left first and followed Oromë west. The Teleri left later, and––being the largest of the three hosts––moved the slowest. When the Teleri reached the Misty Mountains, some among them decided they'd had enough, and refused to move any further westward. These elves were known as the Nandor. Much later on (we're talking thousands of years) the descendants of the Nandor came to be known as the Silvan Elves, and by the end of the Second Age (when Sauron is defeated the first time and the One Ring lost) the Silvan Elves had divided into two groups, one on the eastern side of the Anduin river, and one on the western side, closer to the Misty Mountains. The eastern Silvan Elves settled in Greenwood the Great, later to be called Mirkwood, and were known as the Woodelves. The western group made their home in Lorien, and were called the Galadhrim. This all starting to sound familiar?

Okay, lets jump back to the First age when the Eldar are still following Oromë to Valinor.  Most of the Teleri still wanted to get to Valinor, so they abandoned their Nandor kin and crossed over the Misty Mountains, moved through Eriador, crossed the Blue Mountains and finally entered Beleriand. Again, some of the Teleri decided they didn't want to go any further, so they set up shop in right there, on the far western shores of Middle-Earth. These elves are known as the Sindar.

The rest of the Teleri finally make it to Valinor and are reunited with their Vanyar and Noldor kin, who had made it to Valinor quite a bit faster. The Silmarillion goes into a lot of detail about everything that happens to the elves in Valinor, but to make a long story short, eventually Morgoth manages to poision relations between the Noldor and the Valar, and most of the Noldor decide to return to Middle-earth––
against the wishes of the Valar.When the Noldor make it back to Beleriand, they find that the Sindar have set up a whole kingdom there. Well, having lived in Valinor for quite a while, the Noldor are much more powerful and advanced than the Sindar, and for a while the Noldor basically run the show, leading their Sindar and human allies in a long, and eventually ruinous war against Morgoth and his henchman Sauron. In the end, although Morgoth is defeated by the Valar, the Noldor civilization in Beleriand is basically destroyed, and the entire land sinks under ocean. The elven survivors of this catastrophe––both Noldor and Silvan––escape to the highlands of the Blue Mountains and begin rebuilding their kingdom, which they name Lindon. Meanwhile, the Silvan elves east of the Misty Mountains have basically been . . . twiddling their thumbs, I guess. No one really knows.


So now we can start introducing some well-known characters. The lady Galadriel is one of the Noldor that returned to Middle-earth from Valinor (yes, she's been around that long). She eventually leaves Lindon and moves to Lorien with her hubby Celeborn, where they become the rulers of the Silvan elves that live there. Elrond is another of the Noldor, though he also has some human blood thrown in. He, along with a number of other Noldor, founded the haven of Rivendell in Eriador.

Among the Sindar living in Lindon were a father and son named Oropher and Thranduil. They eventually left Lindon and migrated to Mirkwood (then called Greenwood the Great) where they became the rulers of the Silvan elves that lived there. Tolkien's writings are a little unclear, but it seems that Oropher ruled as king first. He eventually died in the war against Sauron. After his father's death, Thranduil then became king. And its there in Mirkwood that his son, Legolas Greenleaf, was born. 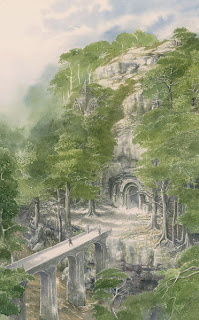 Now, you might be wondering why the heck the Silvan elves in both Mirkwood and Lorien just let this Noldor and Sindar interlopers wander in and take over as rulers. I sure was. Apparently its because the Sindar and Noldor were just a whole lot cooler than the Silvan elves. No, really. Living in Valinor for several thousand years took the Noldor to new heights, both in regard to their physical/spiritual powers, as well as their wisdom and cunning. By the time they returned to Middle-earth, they had far outpaced their Sindar cousins. Well, then the Sindar had the opportunity to rub shoulders with the Noldor in Beleriand for several centuries, and the awesome-ness wore off on them too. So by the time the Noldor and Sindar came into contact with their long-estranged Silvan relations, there was really no contest with respect to who was the smartest and strongest on the block. And apparently the Silvan were cool with that. After all, why take on all the hard work of governing yourself when someone else is perfectly willing to do it?
So we know that we've met both Noldor and Sindar elves (Galadriel and Elrond for the former, Thranduil and Legolas for the later), but have we met any Silvan elves? The answer is . . . I'm not sure. In the Hobbit movies, Tauriel may be a Silvan elf . . . the fact that her hair isn't blond may be telling, but I guess we'll have to wait for the Desolation of Smaug to find out (if it's even brought up directly). Plus, she's not a "real" character, so she barely even counts. The only other elves that I can think of who may be Silvan is Haldir of Lorien and his brothers Rumil and Orophin.

The fact that Legolas and Thranduil are technically foreigners among the Woodelves of Mirkwood leads to some interesting questions. How did Thranduil (or his father) claim the kingship of the Silvan elves? Was the power grab contested by any parties amongst the Silvan elves? Was it even a power grab in the traditional sense of the word? Since elves are immortal, maybe this is not so much a case of foreigners taking over as it is a happy reunion between long-lost relatives. This situation also has implications for the well-known enmity that exists between elves and dwarves. The original events that first pitted dwarves and elves against each other occured in Beleriand, thousands of miles from Mirkwood and the Silvan elves. So did Thranduil and Legolas bring their prejudices with them? It may be that originally the woodelves had no particular grudge with dwarves, and that their enmity only developed later due to the feelings of their Sindar leaders. Possible? Definitely. Likely? Who knows . . .

Anyways, I hope this has been informative, and hopefully it will help us understand the culture of the Mirkwood elves in The Desolation of Smaug.