Now, I'll be the first to admit that Azog isn't exactly my favorite character in the first Hobbit movie. Not because I think he was poorly done or anything; I just don't understand why Bolg couldn't have been used in exactly the same way. But I really don't get why people are pouring so much hate on the Pale Orc. I mean, he wasn't that bad, was he?

Well, John Ruddy over at theonering.net seems to think so. He writes a good, well-reasoned argument and you should definitely take a look at it; but for me at least, his logic fails on a few points. So I've decided to play devil's (or is it "orc's"?) advocate and jot down my own thoughts on everyone's (least) favorite orc, in an unabashed effort to get you, faithful reader, to not hate the poor guy so much.

Jump past the break to read on!

John's complaints about Azog can pretty much be summed up as:


What follows are my thoughts on each of these points.

Sub-par CGI
Gotta admit, I'm not sure where this idea comes from, but I've heard a lot of people expressing it. In my opinion, you can judge a CGI character on three things:

So, as far as I'm concerned, Azog the movie character was fantastic in all four of these categories, but let's go ahead and look at each category of possible "hate-makers". First off, let's look at the detail of the CGI animation . . . we'll compare it to both Gollum and the Great Goblin:

Keeping in mind that the shot of each character was taken at a different distance, I can't discern any difference in detail. All three are incredibly complex renderings right down to the pores in their skin––even Azog.

But we should keep in mind that a CGI character depends on a lot more than just how realistic its skin looks. Maybe the actual animation (i.e., the character's large body movements, motion-capture technology, etc.) was of a lower quality than that of Gollum or the Great Goblin. Take a look at this clip and decide for yourself:

Now again, this is just may admittedly untrained eyes, but the movement/motion capture of Azog seems to be pretty darn good. In fact, I'd go so far as to say that Azog has better animation than the original Gollum in The Two Towers (which is to be expected since WETA has had something like ten years to improve their technique).

Pay particular attention to the animation starting at 1:55, when the fight between Thorin and Azog starts. Did you see the Azog's movements? The physics are amazingly realistic . . . go back and watch Azog swinging his mace. There is a real sense of weight behind the orc's swings, you can even watch his feet lift up off the ground as he brings the weapon down on Thorin's Oakenshield. Every move is fluid and natural . . . there's real meat on them bones, if you will.

Feel free to take a look at other scenes with Azog in them . . . the orc moves like a real creature. So in summation, I don't think its the CGI detail or animation that people are having a problem with. It must be something else.

CGI Look/Design
If its not the detail of the animation that is bothering people, maybe its just the look or design of Azog. Actually, this is exactly the problem I think folks have with Azog. He's not what they were expecting. And its kind of a shame, because if you just look at the orc, without any Tolkien- or LOTR-related preconceptions, he's a pretty beasty looking bad guy. I'll admit that he looks very different from the orcs in the original LOTR movies . . . but for me, that's not such a bad thing. I mean, do you remember Gothmog? Talk about a random, weird, throw-away bad guy who was probably going to die of cancer even if Aragorn hadn't killed him in the ROTK extended addition.

Here's why I think audiences were surprised by Azog: first, he looks like no other orc we've seen so far in the film versions of Middle-Earth . . . and unlike the smaller orcs, there is nothing remotely comical or silly about him; second, he doesn't crouch and do the monkey-walk like the lesser orcs of Moria, Mordor and Isengard, but he's not an Uruk-hai; third, to an even greater extent than the uruk-hai, he's physically intimidating, towering over the film's protagonists like Thorin and Bilbo; fourth, his range of expressions are much greater than the orcs we've seen in LOTR.

Roll everything I mentioned above together, and you get a villain that visually shattered people's expectations. Unlike the prosthetic-covered LOTR orcs, Azog looks so real that we as viewers are thrown straight down to the bottom of the "Uncanny Valley"––Azog is so close to looking real that our minds naturally reject it, creating an instinctive negative reaction to the character. Not because he doesn't look real or good, but because he looks too real, too good.

If you ask me, this is the true underlying reason people don't like Azog. But, for the sake of being thorough, let's look at the other points brought up by Ruddy. 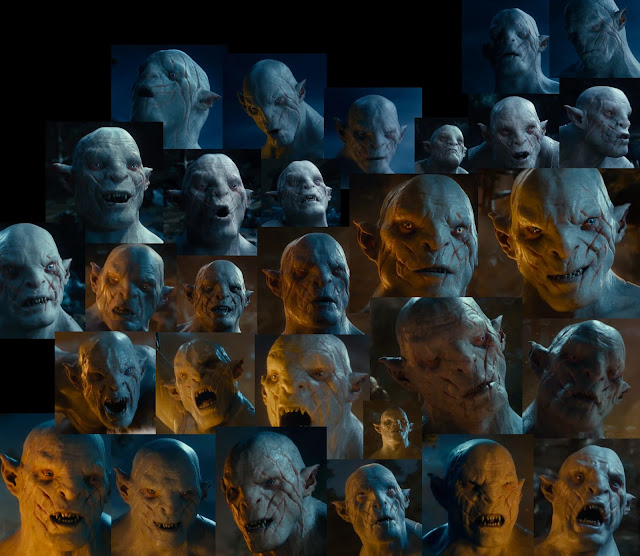 I'm pretty sure this picture says it all. For a character who is pretty much a schoolyard bully (and let's face it, that's all Azog is supposed to be)Azog still manages to convey a late of emotion and facial expression (granted, most of those emotions are a variant on "ooh, look at me, I'm scary!" but hey, he's a thug. That's what thugs do. They be scary). So, I'd say he wins on that point.

Some complaints have focused on the fact that Azog speaks in Black Speech, and not with the cockney accent that all the LOTR orcs use. In his piece, Ruddy explains:

The orcs of The Lord of the Rings movies spoke with Cockney accents. It was consistent throughout the films amongst Isengard and Mordor orcs. It allowed the actors to use an accent that has the ability to come across as rough and aggressive.

Now, I'm not sure exactly what Ruddy means by "Isengard and Mordor orcs", but the Lurtz, the Uruk-hai (from both Isengard and Mordor), and Gothmog, do not speak in Cockney accents. Here's a quote from Andrew Jack, a language coach that worked with the actors in the first LOTR films:

We had intended that the Orcs and Uruk-hai would sound evil, with a guttural vocal quality without any accent. However, the decision was made for the Orcs to be "Cockney," thus bringing a modern urban sound to what was otherwise a rural and altogether separate world of accents. The Uruk-hai retained our original intention.

Jack specifically says that the Uruk-hai "retained [their] original intention". They didn't speak in Cockney accents. And like I mentioned above, Gothmog––who probably has more speaking lines than any other orc in LOTR––doesn't have a cockney accent either.

Now, to be fair, Ruddy's argument isn't just that Azog doesn't speak with a Cockney accent, but that he speaks in a completely different language: the Black Speech of Mordor. And yes, it's true that Azog is the first orc we've seen in the movies to use the Black Speech, but the language was used quite extensively by Sauron, the Nazgul and even the "voice" of the One Ring. What's more, in the books, the orcs use words of the Black Speech quite often, and we're told (both in the narrative and in the appendices) that the orcs did use the Black Speech to communicate with each other. So there is nothing non-canonical about Azog speaking in that language.

But does the fact that we have to read Azog's lines in the subtitles subtract from the character? I'm willing to concede that possibly they do . . . but they certainly didn't for me. I didn't even notice it as being out of place until Ruddy pointed it out in his article. In fact, I quite enjoyed it . . . hearing the Black Speech just pulled me a little bit further into Middle-earth.

So, I guess the thrust of this section is this: not all orcs spoke in a cockney accent in LOTR, so the fact that Azog doesn't really isn't a problem for me, and the fact that he speaks the Black Speech is just plain cool.

Like Azog, Lurtz is a Peter Jackson creation––he does not appear in the books––but for me, that's pretty much where the comparison between the two ends. Lurtz the Uruk-hai has maybe ten minutes of screen time, tops, and has (I think) two lines: "Saruman!" and "Find the Halflings!" Azog, on the other hand, has more screen time (again, I think . . . I haven't summed the times up) and quite a few lines. Lurtz–– possibly due to the fact that he is an actor wearing a prosthetics suit––has a limited range of expression. As we've shown above, Azog is capable of expressing a wide range of emotions.

Case in point, take a look at a video and a picture. The video is of Lurtz, who is about to shoot Boromir in the face (jump forward to time 3:30 for the exact scene):

Sure, there may be just a flicker of a smirk on Lurtz's face when he's notching his arrow . . . but mostly he just has the same grimace he has through the whole movie. What he's about to do is terrible, but you don't really get the sense that he is enjoying it all that much, or that he even cares. He's just doin' a job.

Now take a look at Azog:

This comes from the scene at the end of TH:AUJ when the wargs have pinned the Dwarves, Gandalf and Bilbo up in the trees. Can you see that expression on Azog's face? He is enjoying the moment, savoring the sight of his enemy trapped in a hopeless position. To me, this is a much scarier villain than Lurtz.

Now, before I go on, I just want to clarify one thing: I am in no way saying the end of An Unexpected Journey is better than the end of the Fellowship. No way. In my mind, nothing can beat the end of the first LOTR movie. I'm just saying that Azog is a far scarier/more detailed villain than Lurtz.

So after all that, here's what I think: Azog isn't as bad as we'd like to think––he just isn't what we were expecting, and that is what throws people off. In my opinion, he looks great, and makes a much better villain than Lurtz in FOTR. Now, having said that, I still think they should have just used Bolg. It would have stuck closer to the story and made just as much sense. But who knows? Maybe the Desolation of Smaug will reveal some plot twist that will make this whole Azog/Bolg thing make sense. In three months we'll find out.

Sound off below to let me know what you think!