The Children of Aulë: A Depressing Illustration of the Forced Migrations of the Dwarves 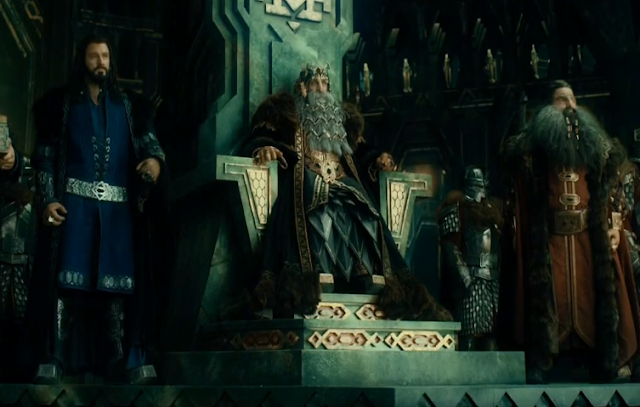 So I've put together geneological charts for both the elves and men of Middle-earth, and I was really looking forward to doing the same for the dwarves––they've always been my favorite anyways. However, I have to admit that after doing the work and the research to make this chart . . . I'm mostly just depressed. Those dwarfs had a crappy history. No, I'm being serious. You probably don't even want to hear about it. It was that bad.

Let's count how many times dwarves were driven out of their homes or forced to migrate due to poverty and the like: Belegost, Nogrod, Gundabad, Moria, Erebor (the first time), the Grey Mountains, and finally Erebor (Smaug's fault this time). That's like SEVEN disasters that forced the dwarves to move. And keep in mind, this tally is only dealing with the Longbeards, the Broadbeams and the Firebeards. We have no idea how many times dwarves from the other Houses (Ironfists, Stiffbeard, Blacklocks, Stonefoots) were driven out of their ancient holdings.

But, considered in another light, this brief illustration of dwarf history also presents us with a story of perseverence and endurance. These dwarves were not ones to forget their history . . . the wrongs done to their distant ancestors seem to have weighed as heavily on the minds of individual dwarves as insults they themselves had received personally. How else can we explain their drive to reconquer and inhabit both Erebor and Moria (and they were eventually successful in resettling both!)?

Another thing that jumped out at me as I reviewed the history of the dwarves is how little we really know of them. Sure, we have a fairly detailed history of the Longbeards (Durin's family), and we know a few salient points of history concerning the Broadbeams and the Firebeards; but we're left in the dark in regards to the achievements, migrations and disasters of the other four Houses . . . we know next to nothing about a majority of the dwarvish race!

And just now, while writing this, I had an interesting thought: generally, the Longbeards are considered the most important of the dwarvish Houses, and Durin the most eminent of the original Seven Fathers of the Dwarves. We believe this because of two things: first, the Longbeards tell us so; and second, because Middle-earth historians (probably elves?) tell us so. But . . . that is an incredibly biased record. Of course the Longbeards are going to tell us they're the most important dwarves––in their own eyes they probably were. And of course elves are going to consider the dwarves that they interacted with most often the most important. But we have no guarantee that among the dwarven race the Longbeards were actually preeminent. In fact, since the Longbeards spent the majority of the Third Age getting kicked our of their homes and wandering across Middle-earth, it's not impossible that they were considered poor or inferior by their eastern cousins. Now, that's conjecture on my part . . . but fun conjecture.

Anyways, below is the figure I put together tracing dwarvish history. Click on it and then open it in a new tab to see it at higher resolution. Enjoy! 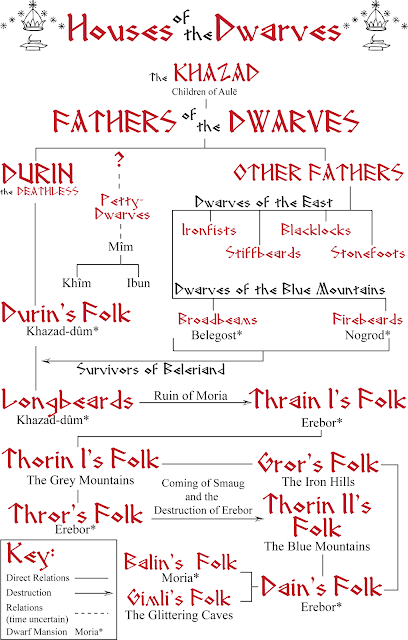