Fleshing Out the Company: Thorin Oakenshield

At last we come to the great dwarf himself, the mover and shaker of this whole affair, the heir of Durin the Deathless, leader of the Longbeards, renowned warrior and general ruckuss-maker, Thorin Oakenshield:

. . . and also a sky-blue one with a long silver tassel. This last belonged to Thorin, an enormously important dwarf, in fact no other than the great Thorin Oakenshield himself 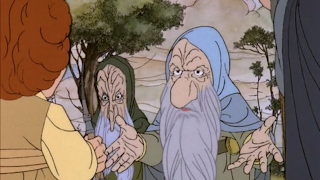 From the get go, I'd better come clean and admit that I like the looks of the cartoon Thorin better. He's got the blue beard and his nose is, well . . . huge, just like a dwarf's nose should be. But, there are some cool things about the movie Thorin as well. Read on, after the break: 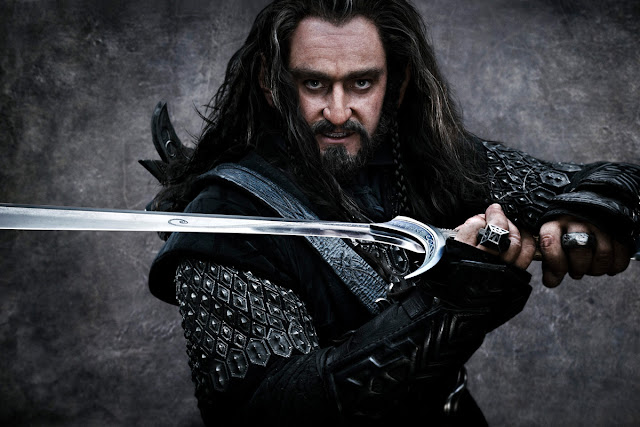 Here's the description that goes with the photo:


As a young Dwarf prince, Thorin witnessed the destruction and terror wrought when a great fire-breathing Dragon attacked the Dwarf Kingdom of Erebor. After slaughtering many of Thorin’s kin, the great serpent, Smaug, entered The Lonely Mountain and took possession of its vast store of gold and jewels. No-one came to the aid of the surviving Dwarves, and thus, a once proud and noble race was forced into exile. Through long years of hardship, Thorin grew to be a strong and fearless fighter and revered leader. In his heart a fierce desire grew; a desire to reclaim his homeland and destroy the beast that had brought such misery upon his people. So when fate offers him an unusual ally, he seizes the chance for revenge.

Movie Thorin is another one of the souped-up dwarves, like Fili and Kili. I guess Mr. Jackson's team thought the movie world wouldn't stand for a full thirteen ugly men. And, if you think about it . . . they're probably right. Doesn't mean I have to like it, though.

Thorin definitely looks a little less than dwarfy: his beard's a pretty wimpy thing, and he's a little lacking in the stocky department; but he's not entirely a lost cause. Orcrist is awesome. They did a great job of matching its style to Bilbo's sword Sting. Thorin's armor is pretty dang cool too–a perfect indicator of both Thorin's prowess as a warrior, and the wealth he's managed to accumulate, even wandering in exile. Thorin himself aludes to his not-so-poverty stricken financial situation in The Hobbit:


'. . . we have never forgotten our stolen treasure. And even now, when I will allow we have a good bit laid by and are not so badly off'–here Thorin stroked the gold chain round his neck–'we still mean to get it back, and bring our curses home to Smaug–if we can.'

I think this little excerpt reveals something important about Thorin: while many of the dwarves–Bifur, Bofur, Bombur, Oin and Gloin–seem to be motivated almost solely by the desire to get gold, Thorin's quest to see Smaug dead is motivated by the desire for vengeance at least as much as it is by the lust for gold . . . perhaps more so. Dwarves, Tolkien explained:


. . . are a tough, thrawn race for the most part, secretive, laborious, [and] retentive of the memory of injuries (end of benefits). . .

–The Return of the King; App. F: I, The Languages and Peoples of of the Third Age

One thing to understand about Thorin is that when he steps into Bag End for the first time, there is already a load of history behind him and the quest he's planning. Thorin explains to Bilbo that he survived Smaug's attack on the Lonely Mountain because he was out exploring the surrounding land, and was thus able to escape when the Dragon descended. Thorin's father Thrain and grandfather Thror escaped through a secret door (more on that in a later post) and together the family fled west.

The homeless dwarves wandered across Middle-Earth, until finally–driven to desperation and maybe a touch of madness–Thror gave all he possessed to his son Thrain and went off on his own to try and reconquer Moria. Needless to say, it ended badly. Thror was brutally murdered by orcs, and his kin–Thorin included–swiftly swore vengeance:


That was the beginning of the War of the Dwarves and Orcs, which was long and deadly, and fought for the most part in deep places beneath the earth.

–The Return of the King; App. E: Durin's Folk

The war ended where it began: at the foot of the Gates of Moria. The Orcs were defeated and vengeance won, but at a high cost. So many dwarves had died in that final battle that they could not be buried, and the survivors were forced to burn the corpses. Thorin was one of those survivors; in fact, it was at that battle that he earned his surname:


It is said that Thorin's shield was cloven and he cast it away and he hewed off with his axe a branch of an oak and held it in his left hand to ward of the strokes of his foes, or to wield as a club. In this way he got his name.

After the war ended, Thorin's father Thrain wandered off as well to seek his fortune. He never returned, and Thorin became the heir of Durin and leader of the Longbeards. He and his folk settled in the Blue Mountains, west of the Shire, and worked iron and mined coal and gathered whatever riches they could. But Thorin never forgot the Lonely Mountain, or all that his family had lost and suffered:


The years lengthened. The embers in the heart of Thorin grew hot again, as he brooded on the wrongs of his House and the vengeance upon the Dragon that he had inherited. He thought of weapons and armies and alliances, as his great hammer rang in his forge; but the armies were dispersed and the alliances broken and the axes of his people were few; and a great anger without hope burned him as he smote the red iron on the anvil.

–The Return of the King; App. E: Durin's Folk

And that, good readers, is a pretty good setup for The Hobbit, wouldn't you agree? No wonder Thorin is as anxious as he is to reclaim his lost home and crown.

This ends our review of all thirteen dwarves in Thorin's Company. They're a motley crew, that's for sure, but an interesting one at that.

Incoming: Something New and Exciting!
Posted by Landon at 1/12/2012